Southeast Asia traffic registered the strongest year-on-year growth of 17.7%, followed by traffic to Southwest Pacific (14.4%). Traffic to Northeast Asia grew 6.8% despite declines of 11.4% and 9.2% for passenger movements between Singapore and Tokyo and Japan respectively.

Low cost carriers (LCCs) continued to expand rapidly during the month. Passenger traffic on LCCs grew 24.6% compared to a year ago and accounted for 28% of Changi’s total. Full service carriers grew 7.3% in terms of passenger movements. During the month, Changi Airport welcomed the commencement of Finnair’s daily service connecting Helsinki to Singapore. Garuda Indonesia also launched a daily service on 1 June linking Singapore to Makassar, the largest city on Sulawesi Island. The addition of Helsinki and Makassar brings to seven[1] the number of new city links connected to Changi this year.

As at 1 June 2011, Changi Airport serves 100 airlines operating over 5,700 weekly scheduled flights to more than 200 cities in some 60 countries and territories. Changi Airport’s traffic statistics are available here.

Other highlights at Changi
New Outlets – Changi Airport welcomed the opening of 25 new retail and F&B outlets in May. These included SingKids Playsystem, Southeast-Asia’s first child-friendly moveable playsystem, at Terminal 3 Basement 2 Mall and Gucci, Hugo Boss and Salvatore Ferragamo stores at Terminal 1’s Transit Mall. All three fashion houses now have a presence in all of Changi’s main terminals.

[1] The new city links connected to Changi since the start of the year are Helsinki in Finland, Makassar and Pekanbaru in Indonesia, Nanning and Zhengzhou in China, Redang in Malaysia and Sao Paolo in Brazil.

Singapore Changi Airport registered 3.39 million passenger movements in February 2011, up 9.1% compared to a year ago. Passenger traffic was boosted by strong travel demand over the Lunar New Year holiday which this year was spread over a long weekend. Southeast and Northeast Asia continued to be the growth drivers, with traffic to these regions increasing by double digits. 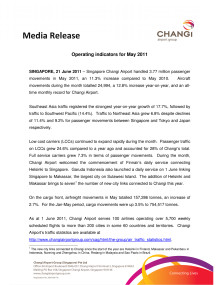