Low cost carriers (LCCs) continued to drive growth to and from Northeast Asia and Southeast Asia. Traffic for these regions recorded double-digit growth as airlines such as Tiger Airways, AirAsia and Cebu Pacific increased frequencies to cities such as Hong Kong, Kuala Lumpur and Manila respectively. Traffic growth to and from Russia was also strong as Transaero Airlines started operations to Moscow while Singapore Airlines had increased frequency on the sector in the last quarter of 2010.

Traffic on LCCs grew 27% compared to a year ago. About one in four passengers who passed through Changi was carried on an LCC. Traffic on full service carriers grew 8%, registering 2.9 million passenger movements.

The growth in passenger traffic was in line with an 11.6% increase in aircraft movements to 24,000 flights. During the month, Air Macau and Hong Kong Airlines started operations at Changi Airport with twice-weekly passenger services to Macau and daily services to Hong Kong respectively. In addition, China Eastern Airlines introduced twice-weekly services to Nanning, the capital of Guangxi in southern China, a new city link on Changi’s network.

Changi recently celebrated the opening of The Fashion Gallery, one of the largest fashion stores at any airport in the world and featuring 17 internationally renowned designer brands such as Boss, Bottega Veneta, Salvatore Ferragamo, Loewe and Yves Saint Laurent. The Fashion Gallery is located at Terminal 2’s Departure Transit Mall. Other new retail outlets, located at Terminal 3’s Departure Transit Mall, are Denni, Bonia Natural, Accessorize and Bee Cheng Hiang.

Retail Campaign – The popular GST-absorbed shopping programme is back. Until 27 March 2011, visitors shopping at the public areas of Changi Airport can enjoy substantial savings equivalent to double the GST amount (about 14%) on their purchases. Thirty nine participating retail outlets, representing 98% of the retail outlets located in Changi Airport’s public areas, are offering this attractive discount on all purchases made at their stores. A full list of participating stores is available at www.changiairport.com.

Changi Airport is the world’s most awarded airport having garnered more than 360 accolades since it opened in 1981. Changi handled more than 42 million passenger movements in 2010, an annual record in passenger traffic. The airport, which has four terminals, serves some 100 airlines flying to over 200 cities in about 60 countries and territories worldwide. A flight takes off or lands at Changi roughly once every two minutes. 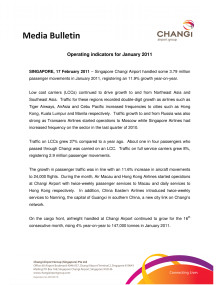