Passenger traffic from most regions enjoyed double-digit growth compared to April 2010. Eastern Europe registered the strongest year-on-year growth of 23%, followed by Southeast Asia (18%) and Western Europe (17%). Passenger traffic to Northeast Asia increased 10%, even as traffic to and from Tokyo and all of Japan declined by 34% and 28% respectively. More passengers were carried between Singapore and points such as Bangkok, Hong Kong, Manila, Melbourne and London.

Low cost carriers, which account for about a quarter of Changi Airport’s passenger traffic, continued to be the growth driver, carrying 26% more passengers compared to a year ago. Full service carriers also enjoyed double-digit growth in passenger traffic of 10%. As at 1 May 2011, Changi serves some 100 airlines operating more than 5,600 flights to 200 cities in 60 countries and territories.

Eu Yan Sang, a leading healthcare company with a core focus in Traditional Chinese Medicine, has opened two outlets in the Departure Halls of Terminal 1 and 2. Other new retail and dining options in the public areas include Perfumes & Cosmetics, a Relay bookstore and Wang Cafe in Terminal 1, Seafood Paradise in Terminal 2 and Chomel in Terminal 3.

Retail Promotion – In conjunction with Changi Airport’s 30th anniversary, Changi Airport Group (CAG) and Visa have launched the second run of the ‘Be a Changi Millionaire’ draw. From now till 30 November, shoppers and diners at Changi Airport qualify for the draw simply by spending a minimum of S$30 in a single receipt at Changi Airport, with the number of lucky draw chances increasing exponentially with the amount spent. Besides the million-dollar top prize, there are also 30 weekly cash prizes of S$1,000 each week. CAG and Visa have also launched ‘Fabulous Fridays’, a 30-week shopping programme which features weekly deals at incredibly discounted prices. The programme will run every Friday until 30 November, with a different product featured every week. To be eligible to purchase the ‘Fabulous Fridays’ deal of the week, shoppers just need to spend a minimum of S$30 in a single receipt at Changi using their Visa card, or S$60 by other means.

For more information on the ‘Be a Changi Millionaire’ and ‘Fabulous Fridays’ promotions, please refer to www.changiairport.com/millionaire.

Singapore Changi Airport registered 3.39 million passenger movements in February 2011, up 9.1% compared to a year ago. Passenger traffic was boosted by strong travel demand over the Lunar New Year holiday which this year was spread over a long weekend. Southeast and Northeast Asia continued to be the growth drivers, with traffic to these regions increasing by double digits. 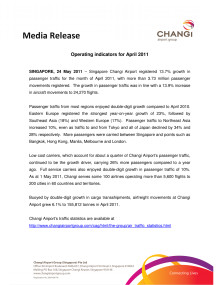