Aircraft movements for the month increased 13.0% to 24,400 as low cost carriers (LCCs) continued to enjoy very strong growth. LCC passenger traffic rose 22.8% during the month, and, year-to-date, accounted for about 24% all traffic at Changi. On the cargo front, March 2011 was Changi's busiest month in three years, with airfreight movements increasing 5.6% to 166,100 tonnes.

For the quarter (January to March 2011), Changi Airport registered 10.9 million passenger movements, an increase of 9.5% compared to the same period last year. This was underpinned by double-digit growth for traffic to and from Eastern Europe, Southeast Asia and Northeast Asia. Changi handled some 70,400 aircraft movements during the same period, up 12.3% year-on-year. Airfreight movements increased 2.9% to 441,400 tonnes of cargo, up 2.9% compared to last year.

Changi Airport achieved a significant milestone when Singapore Airlines began thrice weekly services to Sao Paulo via Barcelona on 28 March 2011. This is the first time that Changi is connected to the South American continent. Changi Airport also celebrated a new connection linking Singapore with Zhengzhou, the capital of China’s Henan Province. Xiamen Airlines’ daily Zhengzhou-Xiamen-Singapore flight began on 27 March. As at 1 April 2011, Changi serves some 100 airlines operating 5,600 weekly flights to more than 200 cities in 60 countries and territories.

Indian specialist scarf supplier Pashma has opened two outlets in Changi. Featured in an open kiosk concept, the two outlets located at the Transit Halls of Terminals 2 and 3 offer a range of silk and silk cashmere luxury tops to travellers and discerning shoppers of cashmere products. 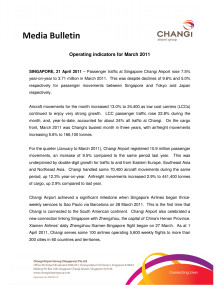