Passenger traffic for the month of March was boosted by traffic growth across all regions. Among Changi’s top 10 country markets, China and India led the gainers with double-digit growth. Strong traffic growth was also observed between Singapore and Asian cities such as Denpasar (+13%), Guangzhou (+18%) and Seoul (+13%).

For the first quarter of this year, Changi Airport registered 15 million passengers, 4.7% higher than during the same period last year. China registered strong growth of 14%, accounting for about 10% of total passenger movements during this period. Aircraft movements rose 2.0% to 90,540, while airfreight movements registered an increase of 6.2%, totalling 494,180 tonnes.

As at 1 April 2017, more than 100 airlines operate at Changi Airport, connecting Singapore to some 380 cities in about 90 countries and territories worldwide.With more than 7,000 weekly scheduled flights, an aircraft takes off or lands at Changi roughly once every 90 seconds.

Frequencies for the following services have been increased starting 26 March:

An additional 38 weekly services will be launched in the coming months as part of the season’s new flights.

In the public areas, Starbucks Reserve has opened their first Asian airport outlet at Terminal 3’s Departure Hall. Coffee lovers will be able to explore different coffee brewing methods, with an ultra-premium line of coffees available at the outlet.

Singapore Changi Airport handled 5.26 million passenger movements in January 2017, an increase of 8.2% year-on-year. Aircraft movements were 4.8% higher with 31,600 landings and takeoffs, while cargo shipments were steady at 158,690 tonnes, compared to the same period last year. 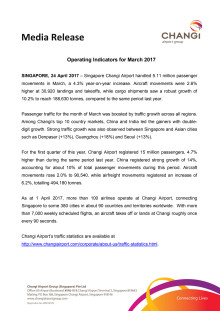