Passenger traffic growth for the month of January was boosted by air travel demand to and from Southeast Asia, Northeast Asia and South Asia. Among Changi Airport’s top 10 country markets, China led the gainers with a strong 31% growth in passenger traffic; this coincided with the Lunar New Year holidays occurring at the tail end of January this year[1]. India (+14%), Indonesia (+14%), and Malaysia (+12%) also registered double-digit growth. As for Changi’s top 10 cities, travel to and from Denpasar increased 18% year-on-year; while Kuala Lumpur and Jakarta also saw healthy growth.

As at 1 January 2017, more than 100 airlines operate at Changi Airport, connecting Singapore to some 380 cities in about 90 countries and territories worldwide.With more than 7,000 weekly scheduled flights, an aircraft takes off or lands at Changi roughly once every 90 seconds.

New Stores & Restaurants – In the transit areas, foodies can now savour gourmet pizzas and pastas among other delights at The Kitchen by Wolfgang Puck – the first of its kind in Asia. A concept by celebrity chef Wolfgang Puck, the full service casual dining restaurant at Terminal 3 offers dishes unique to Changi Airport such as Korean beef short ribs with spicy kimchi and Hong Kong styled steamed Scottish salmon.

Over at Terminal 1’s Departure Transit Lounge, The World is Flat by Tanuki Raw is now open, bringing the spirit of craft beer and a selection of cocktails to Changi Airport, which can be paired with a selection of pizzas and sandwiches available at the bar.

Strong performance on both the passenger and airfreight fronts 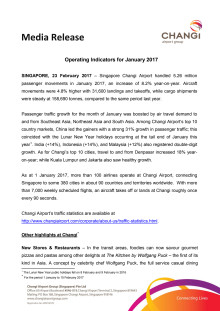 Singapore Changi Airport handled 5.26 million passenger movements in January 2017, an increase of 8.2% year-on-year. Aircraft movements were 4.8% higher with 31,600 landings and takeoffs, while cargo shipments were steady at 158,690 tonnes, compared to the same period last year.