For the month of May, passenger traffic was boosted by a robust 17% growth in South Asia traffic. Among Changi’s top 10 country markets, India led the gainers with a 21% year-on-year growth; with traffic to and from Mumbai and Chennai rising by more than 20%. Another major market, China, also registered double-digit growth of 11%, with more than half a million passengers in May, or about one in ten passengers at Changi during the month.

Cargo shipments increased by double digits for the second month this year, with improvements broad-based across exports, imports and transhipments. With stable recovery of industrial activity in the USA, Germany and Japan, airfreight to and from these markets saw particularly strong growth.

As at 1 June 2017, more than 100 airlines operate at Changi Airport, connecting Singapore to some 380 cities in about 90 countries and territories worldwide.With more than 7,000 weekly scheduled flights, an aircraft takes off or lands at Changi roughly once every 90 seconds.

New Restaurants & Stores – In the transit areas, Irvins Salted Egg has opened their first Changi Airport kiosk at Terminal 2 (T2), offering a range of freshly made salted egg snacks. Also in T2, Tunglok Tea House has opened its first restaurant at the airport, offering an exquisite range of traditional Chinese favourites including dim sum and a selection of Teochew dishes. Over at Terminal 1, Starbucks has opened their seventh Changi Airport outlet.

Singaporeans and travellers looking for a late-night meal now have two new food options at the airport. Indian vegetarian restaurant Bikanervala opened their first 24-hour airport outlet in the public areas of T3, serving a wide range of North and South Indian cuisine, as well as freshly made Indian sweet and savoury snacks. Bakery Cuisine, serving freshly baked bread, pastries and waffles round the clock, has also opened at T2’s Departure Check-in Hall. 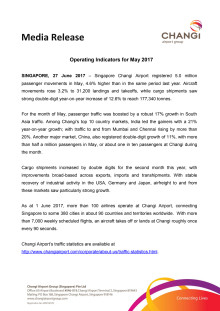