Passenger traffic for the month of June was boosted by growth across all regions. Among Changi’s top 10 country markets, India – leading the gainers since February this year – clocked a robust 25% year-on-year growth, while Vietnam (+12%) and China (+11%) also saw double-digit growth. Bangkok was Changi’s busiest route for the month, followed closely by Kuala Lumpur.

For the first six months of 2017, passenger traffic rose 5.7% to 30.4 million, supported by growth to and from Southeast Asia, Northeast Asia and South Asia. India was the fastest growing among Changi’s top 10 country markets for this period, with more than 2 million passengers travelling between the two countries. Aircraft movements were 3.0% higher at 183,230 landings and takeoffs, while 1.02 million tonnes of airfreight throughput was shipped through Changi from January to June, rising 6.8% year-on-year.

Changi Airport received the ‘Best Airport – Asia’ award at the 2017 Asian Freight, Logistics and Supply Chain (AFLAS) Awards; the first time that Changi has won this award. Changi Airport also received three awards at the Airport Food & Beverage Conference and Awards 2017 – emerging winner in the ‘Airport Food and Beverage Offer of the Year’ and ‘New Food and Beverage Concept of the Year’ global categories, as well as the ‘F&B Marketing and Promotions Campaign of the Year (Asia Pacific)’ category.

As at 1 July 2017, more than 100 airlines operate at Changi Airport, connecting Singapore to some 380 cities in about 90 countries and territories worldwide.With more than 7,000 weekly scheduled flights, an aircraft takes off or lands at Changi roughly once every 90 seconds.

New Services – On 20 June, Changi Airport established a new city link to Athens, with Scoot’s 4x weekly non-stop services to the city. Indian carrier IndiGo also introduced daily services between Singapore and Bengaluru on 1 July. Singapore Airlines doubled its weekly services to Rome, bringing the total to 4x weekly, and stepped up its Singapore-Sydney services from 33x to 35x weekly on 18 June.

New Counters – Changi Travel Services has taken over the management of passenger meeting services in the airport. Changi Meet & Greet counters are located in the Arrival Halls of all three terminals, offering a range of services including greeting at the arrival gates, buggy and porter services. 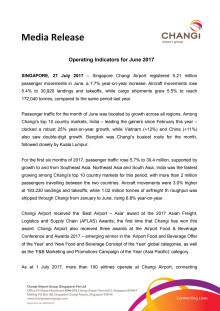