As at 1 August 2017, more than 100 airlines operate at Changi Airport, connecting Singapore to some 380 cities in about 90 countries and territories worldwide. With more than 7,000 weekly scheduled flights, an aircraft takes off or lands at Changi roughly once every 90 seconds.

New Services – Singapore Airlines increased its Melbourne and Dhaka weekly services by three each, bringing the total number of weekly services to 31x and 10x respectively. 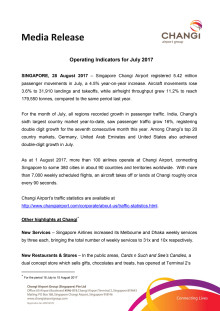