Passenger traffic for the month was supported by growth across all regions, with air travel to and from South Asia, Africa and the Americas rising by double digits. Among Changi’s top 10 country markets, strong performance was registered for India (+18%), China (+11%) and Malaysia (+11%). Guangzhou, Penang and Taipei were the three fastest growing routes for the month, among the 20 busiest routes.

As at 1 September 2017, more than 100 airlines operate at Changi Airport, connecting Singapore to some 380 cities in about 90 countries and territories worldwide. With more than 7,000 weekly scheduled flights, an aircraft takes off or lands at Changi roughly once every 90 seconds.

In the transit area of Terminal 2, a Mid-Autumn Festival Mini Food Hall is offering a wide variety of mooncakes by 155 South Bridge, Peach Garden, Starbucks and Tai Chong Kok from now till 5 October 2017. 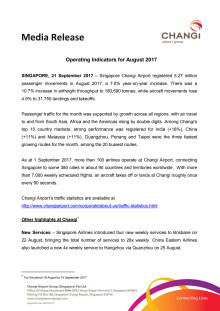