Passenger traffic for the month remained stable compared to a year ago, which saw travel boosted by the Lunar New Year holidays in February 2016. Among Changi’s top 10 country markets, India posted the strongest growth of 14% increase – with traffic to Bengaluru, Mumbai and New Delhi contributing to the growth. Traffic growth to Indonesia and Vietnam was also steady for the month, up 4% in both cases.

As at 1 March 2017, more than 100 airlines operate at Changi Airport, connecting Singapore to some 380 cities in about 90 countries and territories worldwide. With more than 7,000 weekly scheduled flights, an aircraft takes off or lands at Changi roughly once every 90 seconds.

On 5 March, IndiGo Airlines doubled its number of services to Chennai, India to 14x weekly.

In Terminal 2, Crave - The Original Adam Road Nasi Lemak by Selera Rasa serves up their famed Nasi Lemak (a dish of coconut rice with fried chicken and grilled fish cake) and Teh Tarik (pulled milk tea beverage). Also in the same terminal, Asia Favourites, which sells food souvenirs such as pineapple cakes and durian cookies, has commenced operations. 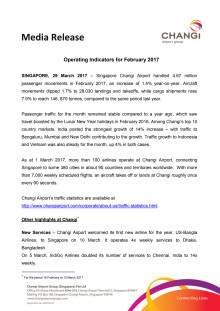