On 11 June, Mr Teo brought his wife and son to Changi Airport, for a family outing. He chose Changi as he wanted a location where his family could enjoy a good meal together, a place for his wife to shop and ample space for his four-year-old son to explore. They were shopping at Terminal 3 when his wife took fancy to a pair of diamond earrings from SK Jewellery.  The affectionate husband bought it for her - never expecting that this one purchase would result in him winning his first-ever lucky draw prize.

When informed of the good news, an elated Mr Teo said, “I’m still in a state of shock!  I was totally surprised at the chance to be a millionaire and never dreamt that it would be possible.   I’m at a loss of words to describe my feelings and joy!”  The lucky draw form was filled up by his wife and his son was the one who dropped the entry into the lucky draw box. Before this win, Mr Teo used to be a sceptic of lucky draws.

As the second finalist for this year’s ‘Be a Changi Millionaire’ Draw, he has won for himself S$5,000 cash and a three day/two night stay in a luxury hotel in Singapore. He will join Australia-based Filipina Ms Lira Wilson, the first finalist, and five other finalists at the Grand Draw in January 2012 to vie for the S$1million grand prize.  This is the second run of the ‘Be a Changi Millionaire’ Draw.

A frequent visitor, Mr Teo’s preference for Changi Airport as a family hangout destination is attributed to its wide retail selection – toys, games arcade, apparel, confectionery and many more. He also cited that prices are comparable to downtown malls with the added benefit of GST absorption[1] for purchases made at most stores in the public areas – another compelling reason for him to keep going back.  Singaporeans contribute a significant 20 percent to total concession sales at Changi Airport.

Taking it all in his stride, the family man has no plans yet for what he will do with the S$1million if he were to win the grand prize. Mr Teo hopes that he can be lucky again at the Grand Draw.  A video of Mr Teo’s reaction to the announcement that he’s the June 2011 monthly winner can be found on www.youtube.com/fansofchangi.

The spots for the next five finalists remain to be filled.  The Millionaire shopping promotion which started in May this year will run till 30 November.  To qualify for the draw, shoppers and diners just need to spend S$30 in a single receipt at Changi Airport, with the number of lucky draw chances increasing exponentially with the amount spent.  Chances are doubled if payment is made with Visa.

The month of June proved to be a lucky one for Singaporeans.  Besides Mr Teo, five other lucky shoppers, all from Singapore, were also picked as the weekly winners. All five of them win for themselves S$1,000 each. Winning purchases included a S$35 duty free purchase at Terminal 1 and a bottle of Nina Ricci’s Love in Paris perfume which costs S$100 at Terminal 3’s Departure Transit Lounge.

With the theme of ‘Gifts and Delicatessen’, August’s ‘Fabulous Fridays’ promotion offers perfect buys for the family or as gifts. For only S$3, you can get Bengawan Solo’s fragrant pineapple tarts, tantalising mooncakes, Bee Cheng Hiang’s signature barbequed meat, and even one of Eu Yan Sang’s best selling items – the bottled Bird’s

Nest with Rock Sugar.  Usually priced at more than S$30, these products are going for a steal at just S$3.  Full details of the 'Fabulous Fridays’ offers can be found in Annex A.

To snag these hot deals, shoppers simply need to make minimum purchase of S$30 using Visa or S$60 by other means at any retail or F&B outlets at Changi Airport. Travellers who wish to purchase the ‘Fabulous Fridays’ deal of the week from the Departure Transit Lounge can visit the respective retail store carrying the item, or the ‘Fabulous Fridays’ event booth (should there not be the particular store at the terminal).

[1] "Flying or Not, You Shop We Absorb" is an ongoing campaign which sees almost all the retail outlets at Changi Airport’s public areas absorbing GST which is presently 7% 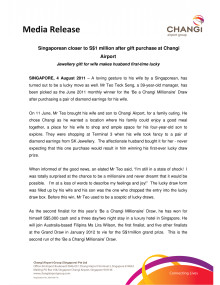