Shoppers at Orchard Road were today greeted by an astonishing sight of four aerialists perched on four-metre high poles performing to the beat of classical music.  The performance was choreographed to precision by Strange Fruit, a world-renowned Australian performing arts company which brought further excitement of being a ‘Changi Millionaire’ to the heart of Orchard Road, at Ngee Ann City.

A total of 25,000 ‘Changi Millionaire’ shopping bags that are bar-coded will be distributed to the public over the weekend (23 – 24 July) by mascots in roller-blades.  Shoppers can head down to Changi Airport[1] over the next four weekends (23 July - 14 August) to have the barcode on their ‘Changi Millionaire’ shopping bags scanned for a chance to win one of 10 iPad 2!

To further engage Singaporeans and visitors alike with the ‘Be a Changi Millionaire’ retail promotion, shoppers will have the opportunity to be entertained by an interactive multimedia game at the Orchard Media Hub  where they will be able to try their hands at ‘grabbing’ a million dollars.  This game, known as the ‘Million Dollar Grab’, will run from 21 July - 17 August.  It uses the latest virtual reality technology where shoppers will see their images projected on LCD screens along the underpass. The aim for them is to grab as much ‘flying’ virtual money as they can.  Changi Airport is the first to introduce such a technology-enhanced interactive game at the Orchard Media Hub.  For a snippet of how the virtual game works, please click on the following link to view the video: www.youtube.com/fansofchangi.

Shoppers who missed the performance by Strange Fruit today can catch the troupe and their stunning aerial display again at Civic Plaza, outside Ngee Ann City on Sunday 24 July.   There are four hourly performances for the day from 3pm - 6pm.  The performance will also be uploaded on Changi Airport’s website at www.changiairport.com/millionaire from 24 July.

[1] An events booth will be set up at Changi Airport Terminal 3, Basement 2, opposite Jollibean outlet 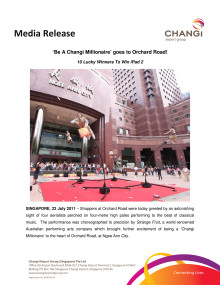