Lira’s love for shopping and, especially for Salvatore Ferragamo designer handbags, has given her a one-in-seven chance to be the next Changi Millionaire. As a Changi Millionaire finalist, she has won S$5,000 cash[1], a three day/ two night stay in a luxurious hotel in Singapore, and return airfare to Singapore for the Grand Draw at Changi Airport in January 2012.

On 6 May 2011, Lira, was on-route to Istanbul for a holiday and was transiting at Changi Airport. While waiting for her flight, the shopping enthusiast decided to check out the retail offerings at Changi’s Terminal 2. It was at The Fashion Gallery store where she landed her eyes upon a S$2,000 Ferragamo handbag – her favourite brand – and decided to add another one to her collection.

"I couldn’t believe that my name got drawn and I had won!" said an ecstatic Lira on being the first finalist for the 2011 Millionaire Draw. "My family and friends were also shocked. They were initially doubtful and suspected that this might be a scam, but after reading and searching your information online about the competition, it gave me assurance that this is indeed true. Now I’m hopeful that I will be the eventual winner!"

In January next year, Lira will join six other finalists to compete for the grand prize of S$1 million cash. Should she be the winner, her grand plans for the new-found fortune would include buying a new house for investment, a shopping spree, travelling around the world and making a second trip to Singapore to learn more of the country’s culture and taste the delectable local food.

This year’s ‘Be a Changi Millionaire’ Draw, which runs over 30 weeks from 1 May to 30 November 2011 is one of the two shopping promotions launched to celebrate Changi Airport’s 30th anniversary. This is the second run of the Millionaire Draw and response to the campaign has been positive. In the first month of the Draw, more than 200,000 entries were received. Concession sales at Changi Airport in May also increased by about 15% year-on-year, higher than the 11% growth in passenger traffic over the same period.

In addition to the monthly winner, four other lucky shoppers were also picked as the weekly winners for the month of May, winning for themselves S$1,000 each. There are two winners each from China and Singapore. Winning purchases included a S$1,230 digital camera from Sprint-Cass (at Terminal 2) and S$430 worth of basic necessities from the Watsons store at Terminal 3’s Departure/Transit Lounge.

Hailing all beauty aficionados! The ‘Fabulous Fridays’ deals during the month of July centre on the theme ‘Perfumes & Cosmetics’ and five popular beauty and skincare products will have 30% slashed off their regular airport retail prices. Kick-starting the string of hot deals last Friday (1 July) was SK-II’s Cellumination Serum Essence, which saw the 150 pieces reserved for the promotion in the public area sold out in less than two hours.

Other exclusive deals for the month include Lancome’s Trio Juicy Tube Collection Voyage (travel-exclusive pack) and Laneige’s Water Sleeping Pack Ex. Not forgetting the men, Calvin Klein’s Eternity Aqua EDT for Men (100ml), which normally retails at S$86 at Changi, will be sold at an incredible price of just S$60.20. Available in limited quantities, these products are expected to fly off the shelves. Perfumes & Cosmetics is one of the top three most popular product categories at Changi Airport.

To enjoy these exclusive deals, shoppers just need to make a minimum purchase of S$30 using their Visa cards or S$60 by other means. Travellers can purchase the products at the central Perfumes & Cosmetics store in the Departure/Transit Lounge at each terminal. Non-travellers can grab the great buys at an event booth set up at Terminal 3 Basement 2.

More information on ‘Be a Changi Millionaire’ and ‘Fabulous Fridays’ can be found on www.changiairport.com/millionaire.

[1] One finalist will win the grand prize of S$1 million. The other six finalists will receive S$5,000 cash each plus other prizes.

Changi Airport (www.changiairport.com) is the world’s most awarded airport having garnered more than 370 accolades since it opened in 1981. It is also one of the world’s busiest airports for international traffic, managing more than 42 million passenger movements in 2010, an annual record. The airport, which has four terminals, serves some 100 airlines flying to over 200 cities in about 60 countries and territories worldwide. A flight takes off or lands at Changi roughly once every two minutes. 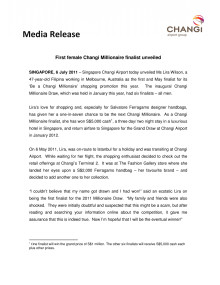