As Changi Airport turns 30 this year, visitors can join in the celebration with 30 weeks of amazing and fun-filled shopping at Changi! In conjunction with Changi Airport’s 30th anniversary, the Changi Airport Group (CAG), together with Visa, is launching in May 2011, two of its most exciting shopping promotions ever – the ‘Be a Changi Millionaire’ draw's second run and ‘Fabulous Fridays’, a shopping programme which features weekly deals at incredibly discounted prices.

Said Ms Lim Peck Hoon, CAG’s Executive Vice President, Commercial, “Shopping and dining are integral parts of the Changi Experience that many of our visitors enjoy immensely at Changi Airport, whether they are travelling or not. As we commemorate Changi Airport’s 30th anniversary this year, what better way to celebrate with our visitors than to organise a unique 30 weeks of great shopping deals that is exciting and rewarding. With these two promotions, shoppers can truly experience the adrenaline rush of grabbing great bargains at steep discounts, and at the same time enjoy the thrilling prospect of winning a million dollars! Through such innovative efforts, we hope to also maximise the sales potential in our terminals and ride the retail growth together with our concession partners.”

‘Be a Changi Millionaire’ and ‘Fabulous Fridays’ are co-sponsored by CAG and Visa.

Augmenting its status as one of the world’s most attractive airport shopping destinations, CAG launched the inaugural ‘Be a Changi Millionaire’ draw in June 2010, which saw one of Changi’s shoppers becoming a millionaire. Former Singapore radio deejay, Ivan Rantung, who had bought a digital camera at Changi while travelling, walked away with the grand prize of S$1 million at an exciting Grand Draw held in January 2011, making him the first person in Singapore to become a millionaire simply by shopping. The inaugural Millionaire campaign received 830,000 entries, creating an all-time participation record for retail promotions at Changi Airport.

Building on the positive response, the popular ‘Be a Changi Millionaire’ will run again in 2011 for about 30 weeks from 1 May to 30 November, and culminate in an exciting Grand Draw in January 2012, where another lucky shopper will win the grand prize of S$1 million. Shoppers can qualify for the draw simply by spending a minimum of S$30 in a single receipt at Changi Airport(1), with the number of lucky draw chances increasing with the amount spent. On top of that, those who pay using Visa cards will receive double the number of chances in the draw(2).

‘Fabulous Fridays’ at Changi Airport
Starting May 2011, the expression ‘TGIF’ will take on a whole new meaning at Changi Airport as CAG and Visa launch ‘Fabulous Fridays’, a special shopping programme offering travellers and visitors at Changi Airport the opportunity to snag some of the season’s hottest buys at a fraction of the original retail price. Also held in conjunction with Changi’s 30th Anniversary, the programme will run for 30 weeks starting 6 May to 30 November 2011, with a different product featured every week at an incredible bargain! To be eligible to purchase the ‘Fabulous Fridays’ deal of the week, shoppers just need to spend a minimum of S$30 in a single receipt at Changi using their Visa card, or S$60 by other means.

Each month will feature a unique theme such as Electronics, Perfumes and Cosmetics, Children, Fashion and Liquor, at an attractive discount. The theme for the month of May is ‘On the Go’, featuring products and gadgets that are useful on the go, namely the Canon Ixus digital camera, Sony PlayStation Portable, Adidas Sennheiser headphones, and Samsonite laptop backpack at an amazing discount of 50%!(4)

Some exciting ‘Fabulous Fridays’ deals to anticipate over the upcoming months range from the wildly sought after iPad 2 and other branded electronic products such as the Nintendo gaming console and Sony digital camera, to beauty products from SKII, Lancome and Laneige – all at 30% off! Other awesome deals include children’s toys and candies, and delicacies like bird’s nest and mooncakes from Bengawan Solo and Eu Yan Sang – at an amazing price of only S$3. Shoppers can also look forward to great bargains on liquor from brands like Johnnie Walker and Remy Martin, as well as vouchers for luxury fashion and watches.

(1) Except money changing facilities, top-up card machines, postal services, medical clinics, airline lounges, push-carts, temporary outposts and Crowne Plaza Hotel.
(2) For details on spending tiers and the corresponding chances, please refer to Annex A: ‘Be a Changi Millionaire’ Promotion Mechanics.
(3) Six finalists will get S$5,000 while one wins the grand prize of S$1 million.
(4) For more details of the products, please refer to Annex B: ‘Fabulous Fridays’ Product Factsheet. 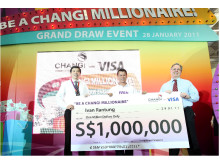 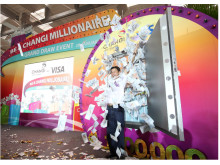 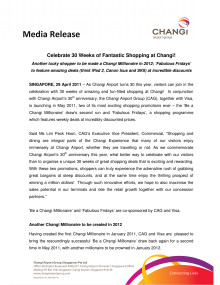