During the month, traffic to and from Southwest Pacific and South Asia registered growths of 8% and 4.9% respectively. Passenger traffic to and from Thailand continued to rise, increasing 20% over the previous year with Bangkok traffic soaring 30%. China traffic rose an encouraging 3.4%.

In the first quarter of 2015, Changi Airport handled 13.1 million passengers, 0.9% lower than the previous year. Aircraft movements were lower by 2.5% to 84,060. Airfreight movements registered an increase of 0.8% to reach 450,400 tonnes. Overall, traffic was weaker across most regions although there was a 4.7% increase for the quarter for South Asia traffic.

As at 1 April 2015, more than 100 airlines operate at Changi Airport, connecting Singapore to some 320 cities in 80 countries and territories worldwide. With more than 6,600 weekly scheduled flights, an aircraft takes off or lands at Changi roughly once every 90 seconds.

Tigerair has also commenced flights to the Chinese cities of Guilin and Nanning, serving these cities once and three times weekly respectively.

Frequencies for the following services have also been increased:

New Stores – Changi Airport saw a large number of new offerings in the last month. At Terminal 2, several fashion, lifestyle and sports brands such as adidas, Lacoste, Avenue Kids and Montblanc, opened new stores within the transit area, providing fresh retail options for passengers. Bratpack has opened its first transit store at Terminal 3, offering passengers a well curated range of casual bags and accessories. Passengers who need to purchase last minute gifts now have added options at So Chocolate and Cocoa Trees, which have opened new outlets in the transit areas of Terminal 2 and 3 respectively.

Passengers looking for new dining choices at Changi Airport are in for a treat this month. Within the transit area of Terminal 1, Italian café operator Culto Caffe opened its first outlet in Singapore, offering its famed Italian coffee for its fans.

Over at Terminal 3’s transit area, passengers looking for a quick bite can now enjoy treats from Dunkin Donuts and Hong Kong Sheng Kee Desserts, which have opened new outlets. Famed ramen chain Ippudo also opened its first airport store, Ippudo Express, with a new unique product on its menu – dip sandwiches – in addition to its signature ramen. For those looking for a pint before their flight, they can now chill out at the new Carlsberg Sports Bar.

Changi Airport is the world's sixth busiest airport for international traffic.  It served a record 54.1 million passengers from around the globe in 2014.  More than 350 retail stores and 160 F&B outlets are situated across three terminals to cater to passengers and visitors.  With over 100 airlines providing connectivity to 320 cities worldwide, Changi Airport handles about 6,600 flights every week, or about one every 90 seconds. 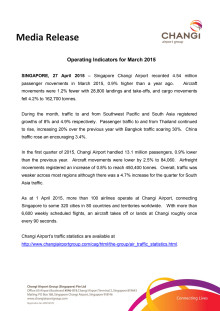