For the month of April, travel demand to Northeast Asia and South Asia continued to drive passenger traffic growth, offset by a decline in Europe travel. Among Changi’s top 10 cities, there were double-digit increases in passenger movements to and from Bangkok, Ho Chi Minh City and Tokyo, compared to April 2014.

As at 1 May 2015, more than 100 airlines operate at Changi Airport, connecting Singapore to over 320 cities in some 80 countries and territories worldwide. With more than 6,600 weekly scheduled flights, an aircraft takes off or lands at Changi roughly once every 90 seconds.

New Stores – Renowned for its vintage-inspired streetwear, Adidas Originals opened its second shop at Changi Airport, in the transit areas of Terminal 3. Within the same terminal, the new Samsung Experience Store offers consumers an interactive experience with its latest range of smartphones, tablets and accessories. Over in Terminal 1, passengers looking for a quick bite can try freshly rolled burrito sized sushi rolls from Sushi Burrito or savour local delights from the new Killiney Kopitiam and Bengawan Solo stores, their third and fourth outlets at Changi respectively. Anyone with a sweet tooth can head to the new So Chocolate confectionary store in Terminal 2’s Departure Transit Lounge.

In the public areas, Subway opened its third airport outlet in Terminal 2, offering its famous six-inch sandwiches made on freshly baked bread with a wide assortment of meats, cheeses and toppings to choose from. Also in T2, Nando’s, a South-African casual dining restaurant chain, commenced operations on 7 May and spiced things up for airport visitors with its signature flame-grilled PERi-PERi chicken. Over in Terminal 3, visitors can now shop for trendy apparel, leather bags and accessories at Smart & Stylish, its first airport store located at the Basement 2 level.

Changi Airport is the world's sixth busiest airport for international traffic.  It served a record 54.1 million passengers from around the globe in 2014.  More than 350 retail stores and 160 F&B outlets are situated across three terminals to cater to passengers and visitors.  With over 100 airlines providing connectivity to 320 cities worldwide, Changi Airport handles about 6,600 flights every week, or about one every 90 seconds. 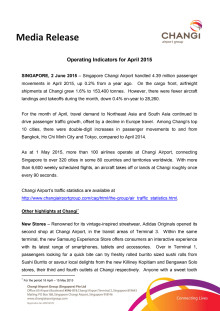