Passenger traffic in January last year was boosted by the Lunar New Year which fell on the last day of the month. Notwithstanding this, traffic to and from South Asia grew 5% in January 2015, mainly fuelled by increased travel on India routes. Traffic between Singapore and Thailand continued to improve, rising 22% for the month. In particular, among Changi Airport’s top 10 destinations, Bangkok registered the strongest growth, up 34%.

As at 1 February 2015, more than 100 airlines operate at Changi Airport, connecting Singapore to some 300 cities in 80 countries and territories worldwide. With more than 6,500 weekly scheduled flights, an aircraft takes off or lands at Changi roughly once every 90 seconds.

New Stores – A new fashion boutique, Femi Nine, has opened at Terminal 3’s Basement 2 mall. It offers an affordable selection of apparel and accessories for ladies to choose from.

1983 Cafe Nanyang in the Departure Hall of Terminal 2 offers its signature local flavours such as kaya toast and its famed nasi lemak for those craving local delights.

Over in the transit areas, American retailer Kate Spade NY has delighted many fans with the opening of its Terminal 3 store, the first in an airport. Local eatery chains Tip Top and Killiney Kopitiam have opened new outlets at Terminal 3, offering travellers additional quick bites options.

Changi Airport is the world's sixth busiest airport for international traffic.  It served a record 541 million passengers from around the globe in 2014.  More than 350 retail stores and 160 F&B outlets are situated across three terminals to cater to passengers and visitors.  With over 100 airlines providing connectivity to 300 cities worldwide, Changi Airport handles about 6,500 flights every week, or about one every 90 seconds.

Passenger traffic at Singapore Changi Airport grew 1.9% on-year in October 2014, with 4.49 million passengers passing through the airport. There was a 2.1% increase in airfreight movements, with 159,700 tonnes of cargo handled during the month. Aircraft landings and takeoffs decreased by 3.7% to 28,380. 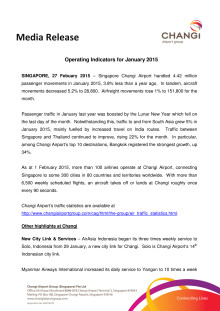