In terms of cargo movements, steady demand for airfreight enabled Changi Airport to close the year on a positive note.  Some 167,000 tonnes of cargo were handled in December, an increase of 6.9% on-year, representing Changi’s busiest month in three years.  In 2011, Changi’s cargo community welcomed the launch of freighter flights to Chengdu and Chongqing in China, and the introduction of all-freighter flights by Emirates and Lufthansa Cargo.  At the same time, Cargolux and Cathay Pacific Cargo commenced operation of the new B747-8F aircraft to Singapore.

Strong travel demand in Asia-Pacific was a key growth driver for Changi Airport in 2011.  Southeast Asia and Northeast Asia were the two best performing regions registering double-digit growth while traffic to and from South Asia and Southwest Pacific also enjoyed good growth.

Long-haul traffic between Singapore and Europe continued to increase as Changi Airport Group (CAG) worked with airlines to drive demand and enhance connectivity.  Significant developments in 2011 include the commencement of Finnair’s daily non-stop Helsinki-Singapore service and the introduction of Lufthansa’s A380 service on the Frankfurt-Singapore route.  Changi Airport is now the world’s busiest multi-carrier[1] A380 hub.

There was little change to the rankings of Changi Airport’s top 10 routes with Jakarta, Hong Kong, Kuala Lumpur, Bangkok and Manila occupying the top five positions.  Despite a significant drop immediately after the March earthquake and tsunami, air travel to Japan recovered in the second half of the year and Tokyo has retained its position as one of Changi’s busiest routes.  For the year, passenger traffic between Singapore and Japan grew by 2%, buoyed by industry efforts to revive travel demand.

Among sectors with at least half a million passengers, Taipei, Manila, New Delhi, Melbourne and Hong Kong registered the strongest percentage growth, reflecting the addition of capacity as well as an increase in demand to and from these markets.

Changi Airport retained its position as one of the world’s most connected air hubs with 11 new city links added in 2011.  These included Changsha, Nanning, Ningbo and Zhenghou, bringing Changi’s connectivity to China to 25 cities and cementing Singapore’s position as the most connected point to China from Southeast Asia.  Other highlights include Changi’s first connection to South America via Singapore Airlines’ thrice-weekly service to Sao Paolo (via Barcelona) and Lao Airlines’ services to Vientiane, completing Singapore’s connectivity to all nine ASEAN neighbours.

In 2011, LCCs carried 26.3% more passengers while passenger movements on full service airlines grew 6.2%, albeit from a larger base.  In terms of flight movements, LCCs accounted for 28.6% (2010: 26.3%) of all flights at Changi.  One in four passengers passing through Changi currently travels on an LCC, compared to around one in five in 2010.

Travellers from around the world continued to rate Changi highly.  In 2011, the airport received 23 accolades including the inaugural Singapore Service Excellence Medallion organised by the Institute of Service Excellence.  The Medallion is the first of its kind in Singapore to recognise achievements by organisations and individuals in inspiring and sustaining a culture of service excellence.

In addition, Changi was also highly regarded by business travellers with readers of Business Traveller (UK) and Business Traveller (Asia-Pacific)magazines voting for Changi as the Best Airport for the 24th and 20th consecutive year respectively.  Changi Airport remains the world’s most awarded, having garnered more than 390 accolades since it opened in 1981.

CAG’s Chief Executive Officer, Mr Lee Seow Hiang, said, “It was an eventful 2011 for Changi Airport.  Despite continuing economic uncertainty and environmental factors, we continued to develop the air hub and delivered another set of strong operating results.  This can be attributed to the resilient support of our airline partners and passengers from around the world, and the dedication of all who work at Changi.

“Besides focusing on Changi Airport’s connectivity to the world, we remain committed to refreshing our in-airport service offerings so that our customers continue to enjoy the first-class Changi Experience they have come to expect.  To that end, passengers can look forward to a brand new-looking Terminal 1 when upgrading works are completed later this year.

"At the same time, we are mindful that continued growth will increase pressure on Changi Airport's ground and air traffic capacity.  We are keeping a close watch on this and are working closely with the authorities and airlines to manage the situation, including implementing a number of changes to our on-the-ground operations.

“The outlook for 2012 remains hazy with the aviation industry expected to face volatile conditions.  Demand for travel may moderate as a result of more subdued consumer confidence.  Nonetheless, CAG will continue to work with its stakeholders to face these challenges and capture opportunities to grow together.”

[1] Lufthansa, Qantas and Singapore Airlines operate more than 200 weekly A380 flights at Changi.

Changi Airport (www.changiairport.com) is the world’s most awarded airport having garnered more than 390 accolades since it opened in 1981.  To serve passengers and visitors from the world over, there are 290 retail stores and 130 F&B outlets across the airport's four terminals.  Changi handled more than 46 million passenger movements in 2011, an annual record.  Today, it serves some 100 airlines flying to over 210 cities in about 60 countries and territories worldwide.  A flight takes off or lands at Changi roughly once every 100 seconds. 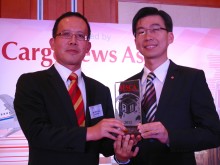 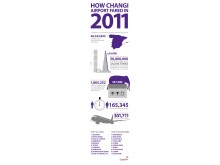 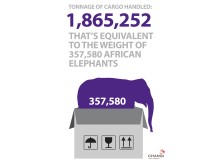 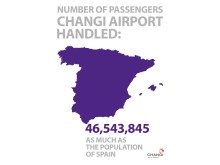 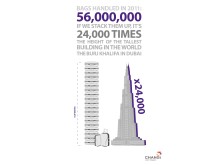 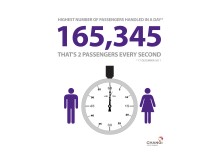 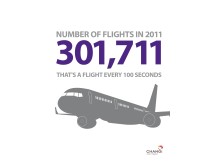 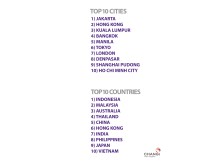 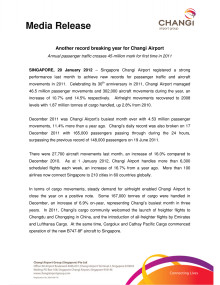