SINGAPORE, 30 November 2015 – Passenger traffic at Singapore Changi Airport grew 2.5% year-on-year in October 2015, with 4.60 million passengers travelling through the airport. There was an increase of 1.8% in airfreight movements, with 162,500 tonnes of cargo handled during the month. Aircraft landings and takeoffs increased by 4.3% to 29,610, the highest mark thus far this year.

Passenger traffic during the month was supported by an increase in air travel to and from Africa and the Americas, offset by weaker performance on some South Asian routes. Among Changi Airport’s top 20 destinations, Perth, Sydney and Tokyo registered double-digit increases.

For the period of January to October 2015, 45.52 million passenger movements were registered at Changi Airport, 2.1% more than the corresponding period in 2014. Cargo shipments held steady at 1.53 million tonnes while aircraft movements grew by 1.2% to 286,980 for the same period.

As at 1 November 2015, more than 100 airlines operate at Changi Airport, connecting Singapore to some 320 cities in about 80 countries and territories worldwide. With more than 6,700 weekly scheduled flights, an aircraft takes off or lands at Changi roughly once every 90 seconds.

New Services – At the start of the Northern Winter 2015/16 season on 25 October, Air China launched a new daily service from Singapore to Yinchuan (via Chengdu). Yinchuan is a new city link for Changi and brings the total number of new destinations to six since the start of this year. Spring Airlines has also resumed its 4x weekly service from Shanghai to Singapore.

Over in the Indian subcontinent, Singapore Airlines now operates three additional services to Mumbai, from 14x to 17x a week. Adding capacity to Australia, Scoot has started a 5x weekly service from Singapore to Melbourne on 1 November, using the Boeing 787-900 Dreamliner aircraft. This new service increases the weekly seat capacity on the Singapore-Melbourne route by 11%.

New Stores – Foodies will be drawn to a world of new flavours and aromas across Changi Airport’s three terminals, where they can choose from Signature Thai Boat Noodles at the new Aoy’s Thai Noodle Bar in Terminal 3, best-selling katsu don and airflown sashimi at Tsubohachi Izakaya Hokkaido in Terminal 2 or the Crazy Tower Burger made with double grain-fed beef patties at the new RV Café over in Terminal 1.

In the transit areas, German luxury fashion house Hugo Boss opened its second airport outlet in Terminal 2, offering a comprehensive range of classic to modern apparel for both men and women. Also in the same terminal, travellers now get to shop at Tory Burch, the American womenswear label renowned for its classic yet modern sensibility.

Changi Airport is the world's seventh busiest airport for international traffic.  It served a record 54.1 million passengers from around the globe in 2014.  More than 350 retail stores and 160 F&B outlets are situated across three terminals to cater to passengers and visitors.  With over 100 airlines providing connectivity to 320 cities worldwide, Changi Airport handles about 6,700 flights every week, or about one every 90 seconds. 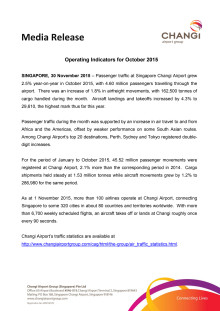