Growth was particularly strong for traffic to and from Australia (+12%) and New Zealand (+17%). Among Changi’s top 20 country markets, double-digit increases were also recorded for Cambodia, Japan and Taiwan.

For year-to-date movements, a total of 50.2 million passengers travelled through Changi Airport, 2.4% more than the corresponding period in 2014. Airfreight shipments held steady at 1.69 million tonnes, while flight movements grew 1.3% to 315,710 for the same period.

As at 1 December 2015, more than 100 airlines operate at Changi Airport, connecting Singapore to some 320 cities in about 80 countries and territories worldwide. With more than 6,800 weekly scheduled flights, an aircraft takes off or lands at Changi roughly once every 90 seconds.

New Services – Enhancing links to South Asia, Tigerair launched a new thrice weekly service to Lucknow, India from 3 December. Along with Bangalore, Chennai, Kochi, Hyderabad and Tiruchirapalli, it is the sixth Indian city in the airline’s network. With this new service, there are more than 390 weekly flights that connect Singapore to 13 cities in India.

Other new city links for Changi Airport are Pattaya (U-Tapao) in Thailand and Guiyang in China. The former has been served by a new daily service operated by Thai AirAsia since 27 November, while Jetstar Asia started a new twice weekly service to Guiyang on 14 December. Jetstar Asia has also launched thrice weekly services to Danang, Palembang and Pekanbaru.

Last but not least, shopaholics can now indulge in retail therapy with at The Fashion Gallery (Terminal 1), Charles & Keith (Terminal 2), Rolex and Longchamp (both in Terminal 3).

Changi Airport is the world's sixth busiest airport for international traffic.  It served a record 54.1 million passengers from around the globe in 2014.  More than 350 retail stores and 160 F&B outlets are situated across three terminals to cater to passengers and visitors.  With over 100 airlines providing connectivity to 320 cities worldwide, Changi Airport handles about 6,700 flights every week, or about one every 90 seconds. 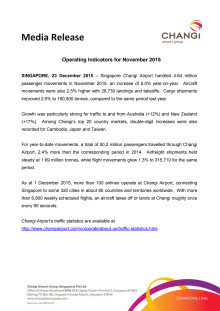