In June, all regions registered growth, with the exception of South Asia, which saw a decline of 3%. Among Changi’s top 10 markets, Japan (+12%) and China (+8%) led the gainers. Shanghai was the fastest growing among Changi’s top 10 destinations, rising 19%.

For the first half of the year, Changi Airport registered 33.2 million passenger movements, a 3.6% year-on-year increase. Aircraft movements dipped 0.8% to 190,000 while airfreight throughput fell 5.7% to 983,000 tonnes. Eight out of Changi’s top 10 markets recorded growth; Japan registered the strongest performance (+11%) while traffic to and from Indonesia (-1%) and Thailand (-2%) was weaker.

As at 1 July 2019, more than 120 airlines operate at Changi Airport, connecting Singapore to some 380 cities in about 100 countries and territories worldwide. With more than 7,400 weekly scheduled flights, an aircraft takes off or lands at Changi roughly once every 80 seconds.

Qatar Airways Cargo commenced freighter operations to Changi Airport on 6 July, with a 2x weekly service connecting to Macau and USA among other destinations.

The world's seventh busiest airport for international traffic, Changi Airport managed a record 65.6 million passenger movements in 2018. The airport’s latest gem, Jewel Changi Airport, opened in April 2019 and now attracts millions of visitors every month. Including Jewel, Changi Airport’s retail and dining offerings total more than 500 stores and over 260 F&B outlets. With over 100 airlines connecting Singapore to 380 cities worldwide, Changi Airport handles about 7,400 flights every week, or about one every 80 seconds.

Operating Indicators for May 2019

Singapore Changi Airport handled 5.41 million passenger movements in May 2019, a 2.1% year-on-year increase. Aircraft movements dipped 2% to 31,700 landings and takeoffs, while airfreight throughput declined 5% to 172,000 tonnes for the month. 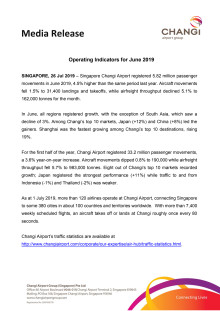