SINGAPORE, 24 May 2019 – Singapore Changi Airport managed 5.58 million passenger movements in April, an increase of 2.8% compared to the same period last year. Aircraft movements dipped 1.7% with 31,500 landings and takeoffs, while airfreight throughput declined 12.8% to 156,000 tonnes for the month.

For the month of April, passenger traffic growth was recorded for all regions, except for South Asia. Among Changi’s top 10 markets, Australia led the gainers, with an 8% year-on-year increase in passenger movements.

As at 1 May 2019, more than 100 airlines operate at Changi Airport, connecting Singapore to some 400 cities in about 100 countries and territories worldwide. With more than 7,400 weekly scheduled flights, an aircraft takes off or lands at Changi roughly once every 80 seconds.

Other highlights at Changi[1]

In T1’s transit area, Under Armour has opened its first airport store, offering footwear, accessories, as well as sports and casual apparel. Also in T1, Pazzion has opened its second airport transit store with a range of shoes for every occasion, while House of Samsonite has commenced operations, offering a wide selection of travel luggage, bags and accessories.

The world's seventh busiest airport for international traffic, Changi Airport managed a record 65.6 million passenger movements in 2018. Including the new Jewel Changi Airport, Changi has about 600 retail and service stores, as well as more than 220 F&B outlets. With over 100 airlines connecting Singapore to 400 cities worldwide, Changi Airport handles about 7,400 flights every week, or about one every 80 seconds. 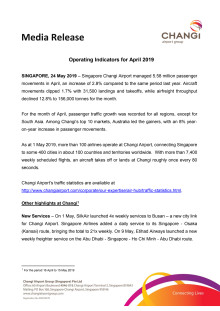