For the month of September, all regions registered growth, with traffic to and from Northeast Asia rising 7%. This was supported by the strong performance of China (+12%) and Japan (+11%), which led the gainers among Changi’s top markets. Europe and North America also registered strong growth, both registering double-digit year-on-year growth.

For the first three quarters of 2018, passenger traffic rose 5.8% to 48.7 million, compared to the same period last year. India, Japan, the United Kingdom, Germany and the United States were among the fastest growing markets, all registering double-digit growth. Aircraft movements grew 3.8% to reach 287, 960 landings and takeoffs, while 1.59 million tonnes of airfreight throughput was shipped through Changi during the nine months, a rise of 2.3% year-on-year. Among Changi’s top 10 cargo markets, India (+9%) and Japan (+6%) were among the fastest growing. Growth was registered for all cargo flows[1].

As at 1 October 2018, more than 100 airlines operate at Changi Airport, connecting Singapore to some 400 cities in about 100 countries and territories worldwide. With more than 7,200 weekly scheduled flights, an aircraft takes off or lands at Changi roughly once every 80 seconds.

At the World Routes Marketing Awards 2018 held in Guangzhou last month, Changi Airport emerged as the winner in the ‘Over 50 Million Passengers’ category. The annual awards recognise excellence in air hub marketing, and winners are determined by a panel of senior airline representatives. 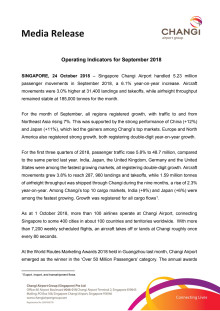