For the month of November, passenger traffic was underpinned by growth across all regions. Traffic to and from South Asia saw double-digit growth, with India (+14%) leading among Changi’s top 10 markets. Double-digit growth was also registered for Germany (+30%), the United States (+22%) and New Zealand (+17%).

As at 1 December 2018, more than 100 airlines operate at Changi Airport, connecting Singapore to some 400 cities in about 100 countries and territories worldwide. With more than 7,200 weekly scheduled flights, an aircraft takes off or lands at Changi roughly once every 80 seconds.

In the public areas, fast-food chain Burger King has opened in T1. Michelin-recommended Hong Kong brand Chee Kei, a new-to-Changi store offering authentic Cantonese food, and Ya Kun Kaya Toast, a Singaporean homegrown café offering a range of local delights, have opened in T2. In the same terminal, #Sip has made its debut in Changi, with a wide variety of drink options. Over in T3, Ramen Champion & Hokkaido Paradise, a new concept at Changi, offering a wide range of Japanese cuisine, has commenced operations. Saap Saap Thai and Saap Saap Thai Desserts have also opened in T3, with a selection of casual Thai dining options.

Singapore Changi Airport handled 5.38 million passenger movements in October 2018, a 4.3% year-on-year increase. Aircraft movements were 3.2% higher at 32,800 landings and takeoffs, while airfreight throughput grew 2.1% to reach 190,000 tonnes for the month. 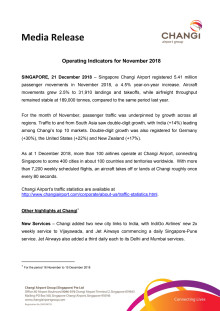