As at 1 June 2013, more than 100 airlines operate at Changi Airport, connecting Singapore to 250 cities in some 60 countries and territories worldwide.  With more than 6,600 weekly scheduled flights, an aircraft takes off or lands at Changi roughly once every 100 seconds.

New Airline – Changi Airport welcomed the return of SWISS on 13 May 2013 after a four-year hiatus.  The Switzerland flag-carrier’s daily Zurich-Singapore services will boost Changi Airport’s connectivity to Europe.  With the arrival of SWISS, Changi Airport is now connected via more than 300 weekly flights and 52,000 weekly one-way seats to 14 major European cities.

Changi Recommends, a service that offers deals and information to travellers arriving into Singapore, has opened in Terminal 1’s Arrival Hall.  With the opening of this outlet, Changi Recommends is now available in all terminals of the airport.

Changi Airport (www.changiairport.com) is the world’s most awarded airport with more than 430 accolades received since it opened in 1981. To serve passengers and visitors from the world over, there are over 330 retail stores and 120 F&B outlets across the airport's three terminals.  Changi handled more than 51 million passenger movements in 2012, an annual record.  Today, it serves some 100 airlines flying to over 250 cities in about 60 countries and territories worldwide.  A flight takes off or lands at Changi roughly once every 100 seconds.

Singapore Changi Airport achieved its highest passenger traffic ever for the month of March when it registered 4.61 million passenger movements in March 2013, an increase of 7.7% over the same month last year. Holiday makers travelling over the Good Friday long weekend and the weekend prior contributed to the traffic growth. In tandem, aircraft movements grew by 5.3% to 28,400 flights.

Another record breaking year for Changi Airport in 2013

SINGAPORE, 23 July 2013 – Passenger traffic at Singapore Changi Airport increased 6.1% in June 2013, with 4.67 million passengers passing through the airport. This marks the highest number of passenger movements Changi has handled in a month this year. In terms of flight movements, a total of 28,300 aircraft landings and take-offs were recorded, a growth of 6.1% year-on-year.

Singapore Changi Airport handled some 4.54 million passenger movements in July 2013, an increase of 4.0% compared to a year ago. Air traffic movements for the month also grew by 6.9%, with 29,000 landings and take-offs recorded at Changi. Airfreight movements increased by 1.1% on-year, with 160,000 tonnes of cargo passing through Changi Airport during the month. 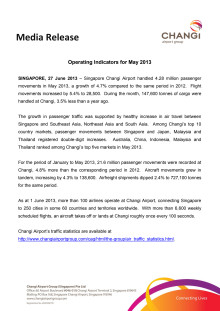