In June, traffic between Singapore and Europe grew 19%. Among Changi’s top 10 markets, Indonesia (+11%) and Japan (+12%) were the fastest growing, boosted by travel to Denpasar and Tokyo. Routes to London, Melbourne, Mumbai and Shanghai also registered double digit growth.

As at 1 July 2018, more than 100 airlines operate at Changi Airport, connecting Singapore to some 400 cities in about 100 countries and territories worldwide. With more than 7,200 weekly scheduled flights, an aircraft takes off or lands at Changi roughly once every 80 seconds.

Operating Indicators for May 2018 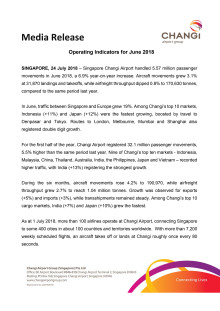