Passenger traffic growth during January was broad-based with increases recorded for all regions except the Middle East. Among Changi Airport’s top 10 markets, Australia, China, India and Japan registered double-digit growth while there was a decline in traffic for Malaysia and Thailand. Among Changi’s top 20 routes, Delhi, Denpasar and Melbourne were the fastest growing.

As at 1 February 2019, more than 100 airlines operate at Changi Airport, connecting Singapore to some 400 cities in about 100 countries and territories worldwide. With more than 7,400 weekly scheduled flights, an aircraft takes off or lands at Changi roughly once every 80 seconds.

New Services – On 29 January, Jetstar launched a thrice-weekly charter service to Xuzhou, Singapore’s first connection to the Chinese city. On 1 February, Changi Airport welcomed its first new carrier of the year - Juneyao Airlines, operating a new daily service to Shanghai Pudong with its brand new 787-9s. Changi Airport is connected to 35 cities in China via more than 400 weekly services.

New Restaurants & Stores – In the transit areas, Irvin’s Salted Egg has opened a kiosk at T1.

In the public areas, new eateries have opened at T3’s Basement 2 (B2) including three by the Pezzo Group – Crave, Coffee Boy, and Stuff’d. The terminal now also has Mr Teh Tarik Express and Terminal M – a multi-concept gourmet food hall, featuring a mix of Korean, Chinese and Japanese delights.

Also at T3 B2, casual clothing retailer The Blues has opened, while at T3’s Departure Hall, The Cocoa Trees has commenced operations, offering a range of chocolate and confectionary products.

Changi Airport is the world's seventh busiest airport for international traffic, managing a record 65.6 million passenger movements in 2018. Changi Airport has 400 retail and service stores, as well as 140 F&B outlets. With over 100 airlines providing connectivity to 400 cities worldwide, Changi Airport handles about 7,400 flights every week, or about one every 80 seconds. 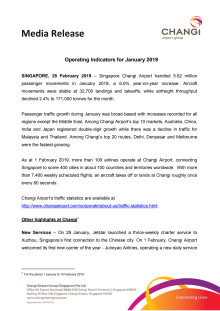