SINGAPORE, 24 February 2014 – Singapore Changi Airport handled 4.60 million passengers in January 2014, an increase of 6.3% on-year.  Air traffic movements grew correspondingly, with a total of 30,400 landings and take-offs recorded during the month, or 7.6% more compared to a year ago.

The growth in passenger traffic was supported by a healthy increase in air travel between Singapore and Southeast Asia, Northeast Asia, Southwest Pacific and the Middle East.  Among Changi’s top country markets, double-digit growth was registered for travel to and from China, Hong Kong, Indonesia, Japan, Malaysia and Vietnam.  Travel to Thailand however saw a decline with Bangkok traffic decreasing by a quarter.

In terms of airfreight, 151,400 tonnes of cargo were processed at Changi Airport last month, a 3.8% increase year-on-year as air shipments picked up ahead of the Lunar New Year period, which this year occurred 10 days earlier.

As at 1 February 2014, more than 100 airlines operate at Changi Airport, connecting Singapore to 280 cities in about 60 countries and territories worldwide.  With more than 6,900 weekly scheduled flights, an aircraft takes off or lands at Changi roughly once every 90 seconds.

New Stores – Three new outlets have commenced operations in the public areas of Changi Airport’s terminals.  Paris Baguette, renowned for its Royal Pudding, fresh pastries, cakes and bread, has opened its first store in Terminal 2’s Arrival Hall.  An extensive range of stationery, as well as English and Chinese books may be found at the new Du Yi Bookshop in Terminal 3’s Basement 2.  Travellers looking for a tranquil environment to refresh and relax after their flight are invited to check-in at The Haven in Terminal 3’s Arrival Hall.

Changi Airport Group (Singapore) Pte Ltd (CAG) (www.changiairportgroup.com) was formed on 16 June 2009 and the corporatisation of Singapore Changi Airport (IATA: SIN, ICAO: WSSS) followed on 1 July 2009.  As the company managing Changi Airport, CAG undertakes key functions focusing on airport operations and management, air hub development, commercial activities and airport emergency services.  CAG also manages Seletar Airport (IATA: XSP, ICAO: WSSL) and through its subsidiary Changi Airports International, invests in and manages foreign airports.
Changi Airport (www.changiairport.com) is the world’s most awarded airport with more than 450 accolades received since it opened in 1981. To serve passengers and visitors from the world over, there are over 350 retail stores and 120 F&B outlets across the airport's three terminals.  Changi handled more than 53 million passenger movements in 2013, an annual record.  Today, it serves more than 100 airlines flying to 280 cities in about 60 countries and territories worldwide.  A flight takes off or lands at Changi roughly once every 90 seconds.

Another record breaking year for Changi Airport in 2013

Singapore Changi Airport managed 4.49 million passenger movements in March 2014, 2.5% lower than a year before. There were 29,100 landings and take-offs at Changi last month, a 2.5% increase compared to March 2013. On the cargo front, 169,800 tonnes of airfreight shipments were processed last month, a slight decline of 1.3% on-year.

Passenger traffic at Singapore Changi Airport totalled 4.11 million passengers in February 2014, 0.2% less than a year ago. In terms of flight movements, aircraft landings and takeoffs rose by 3.2% to 26,800. Total cargo volume dipped 2.6% to 127,700 tonnes year-on-year. 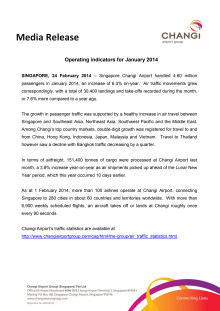 Singapore Changi Airport handled 4.60 million passengers in January 2014, an increase of 6.3% on-year. Air traffic movements grew correspondingly, with a total of 30,400 landings and take-offs recorded during the month, or 7.6% more compared to a year ago.