The growth in passenger traffic was supported by an increase in air travel between Singapore and all regions except the Americas.  Among Changi Airport’s top 10 country markets, passenger movements to and from Hong Kong, India, Indonesia and Japan registered double-digit increases.  However, Thailand and China traffic registered declines of 15% and 8% respectively.

On a rolling 12-month basis, passenger traffic at Changi Airport crossed the 54-million mark for the first time in history with 54.02 million passenger movements recorded for the year ended 30 April 2014.

As at 1 May 2014, more than 100 airlines operate at Changi Airport, connecting Singapore to 270 cities in some 60 countries and territories worldwide. With more than 6,600 weekly scheduled flights, an aircraft takes off or lands at Changi roughly once every 90 seconds.

Another new carrier at Changi, Spring Airlines (IATA: 9C) launched a thrice-weekly Shanghai-Singapore service on 25 April.  With the commencement of its service, Spring Airlines is the first low-cost carrier to operate this route.

Over in the transit areas, Singapore-based luxury tea company TWG Tea opened its second tea boutique in Changi Airport.  Located in Terminal 1’s Departure Transit Lounge, passengers have a range of exotic teas or tea-infused macarons and chocolate bonbons to choose from.

Changi Airport is the world's fifth busiest airport for international traffic.  It served a record 53.7 million passengers from around the globe in 2013.  More than 350 retail stores and 120 F&B outlets are situated across three terminals to cater to passengers and visitors.  With over 100 airlines providing connectivity to 270 cities worldwide, Changi Airport handles about 6,600 flights every week, or about one every 90 seconds.

Singapore Changi Airport managed 4.49 million passenger movements in March 2014, 2.5% lower than a year before. There were 29,100 landings and take-offs at Changi last month, a 2.5% increase compared to March 2013. On the cargo front, 169,800 tonnes of airfreight shipments were processed last month, a slight decline of 1.3% on-year.

Passenger traffic at Singapore Changi Airport totalled 4.11 million passengers in February 2014, 0.2% less than a year ago. In terms of flight movements, aircraft landings and takeoffs rose by 3.2% to 26,800. Total cargo volume dipped 2.6% to 127,700 tonnes year-on-year.

Operating Indicators for May 2014

Singapore Changi Airport managed 4.65 million passengers in June 2014, representing the highest number of passenger movements Changi has handled in a month this year. 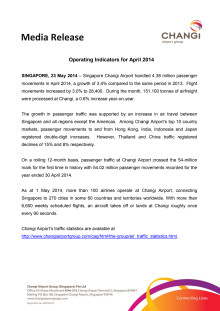