SINGAPORE, 31 January 2013 – Singapore Changi Airport experienced its busiest month ever last month to cross the 50-million passenger movements mark for the first time in the airport’s 31-year history.  Passenger traffic for the year totalled 51.2 million, increasing by 10.0% over the whole of 2011.  Flight movements grew 7.6% to 324,700 while cargo volumes declined 3.2% to 1.81 million tonnes, suppressed by uncertainties in the global economy.

For December 2012, Changi Airport registered 4.92 million passenger movements, a growth of 8.6% year-on-year.  Changi’s daily record was broken on 22 December 2012, the Saturday before Christmas Day, with 180,400 passengers passing through during the 24 hours.

There were 29,000 landings and take-offs last month, 4.7% more than a year ago.  The airport ended the year by handling 152,900 tonnes of airfreight in December, 8.2% less than a year before.  As at 1 January 2013, Changi Airport handles more than 6,500 weekly scheduled flights with 110 airlines connecting Singapore to 240 cities in 60 countries around the world.

Changi Airport’s full year passenger, cargo and aircraft movements statistics are provided in Annex A and are also available at

Despite weak market conditions in the Eurozone, there was encouraging improvement in demand for travel to and from Europe.  In 2012, passenger traffic between Singapore and Europe grew 7.5%.  Closer to home, Changi continued to experience strong growth in the South Asia (12.4%), Northeast Asia (9.9%), Southeast Asia (9.7%) and Southwest Pacific (9.4%) regions, accentuating its position as a key air hub in Asia-Pacific.

In terms of Changi’s busiest routes, Jakarta, Hong Kong, Bangkok, Kuala Lumpur and Manila occupied the top five positions in 2012 (See Annex Bfor list).  Within the top 10, Bangkok and Tokyo saw robust increases of more than 10%, as traffic recovered following the floods in Thailand and the earthquake in Japan in 2011.

Changi Airport also enjoyed positive growth to and from gateway hubs.  Beijing, Frankfurt and Guangzhou registered the strongest percentage increase in passenger traffic to and from Singapore, among sectors with at least half a million passengers.

Besides increasing demand on traditional gateway routes, Changi Airport’s connectivity to secondary cities was also enhanced during the year – Australia’s Gold Coast, Paro in Bhutan, Taiyuan in China, Visakhapatnam in India, Padang in Indonesia, Kota Bahru in Malaysia and Iloilo in the Philippines were additions to Changi’s global network of city links.  During the year, non-stop services were also launched to the Chinese cities Tianjin and Wuhan.  As at 1 January 2013, Changi Airport is connected to 25 cities in China.

On the cargo front, economic uncertainty in many parts of the world dampened airfreight volumes at Changi Airport.  Shipments to and from China and the United States, Changi’s top cargo markets, declined after positive growth in 2011.

Despite the downward pressure on cargo volumes, niche segments such as perishables, live animals and pharmaceuticals grew during the year.  Notably, Changi also achieved growth in cargo tonnage to and from Africa and the Oceania region.

During the year, CAG worked with its partners to enhance infrastructure and offerings at the Changi Airfreight Centre.  It welcomed the opening of the FedEx Express South Pacific Regional Hub, a facility that consolidates FedEx’s air, ground and customs clearance operations within Changi’s Air Cargo Express Hub.

Changi Airport continued to be viewed favourably among travellers and the industry.  Changi received 30 awards during the year including Business Traveller’s Best Airport in the World accolade for the 25th consecutive time.  The cargo community also honoured Changi with the Airport of the Year award at the inaugural Payload Asia Awards.  The full list of accolades achieved in 2012 is in Annex C.

CAG’s Chief Executive Officer, Mr Lee Seow Hiang, said, “2012 was indeed a good year for us.  In spite of the economic challenges faced by the aviation industry, we stayed nimble and worked extremely closely with our partners.  We introduced initiatives such as the Changi Transit Programme and Changi Connects to enhance Changi’s value proposition as a transfer hub.  We enjoyed strong growth in transfer traffic in 2012 and will be looking to sustain our market share with these new initiatives.

“For our millions of passengers, CAG remains committed to improving the Changi Experience so that they and airport visitors alike continue to discover delightful moments while at Changi.  This commitment will drive our development plans for the new Terminal 4, construction of which will begin this year.

“In the near term, Changi Airport’s performance will depend largely on how quickly markets recover from the slowdown.  But we are confident that CAG’s strong partnership with our stakeholders will see Changi through the challenges that lie ahead.”

Changi Airport (www.changiairport.com) is the world’s most awarded airport having garnered more than 420 accolades since it opened in 1981. To serve passengers and visitors from the world over, there are over 330 retail stores and 120 F&B outlets across the airport's three terminals.  Changi handled more than 51 million passenger movements in 2012, an annual record.  Today, it serves some 110 airlines flying to over 240 cities in about 60 countries and territories worldwide.  A flight takes off or lands at Changi roughly once every 100 seconds. 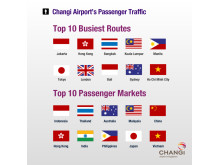 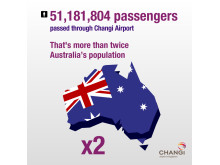 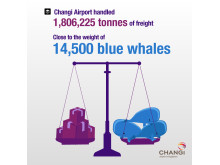 More than 1.8 million tonnes of freight was handled, equivalent to the weight of 14,500 blue whales. 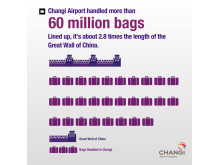 Line up the >60 million bags handled at Changi Airport and it's about 2.8 times the length of the Great Wall! 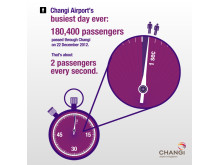 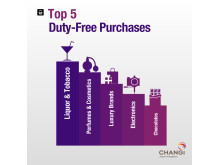 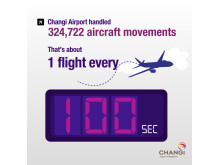 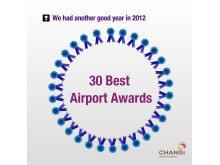 Total number of awards wo... 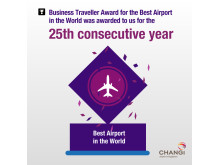 Voted Best Airport in the...

Voted Best Airport in the World by readers of Business Traveller magazine for 25 consecutive years - that is a record we're honoured to h... 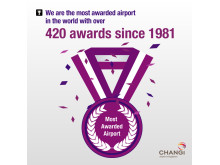 Total number of awards wo...

Having won more than 420 awards and accolades since 1981, Changi Airport is the world's most awarded airport. 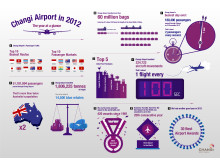 A set of infographics that summarizes Changi Airport's achievements in 2012 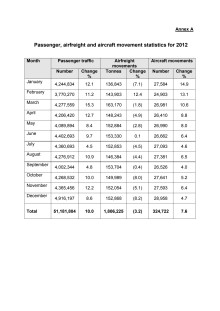 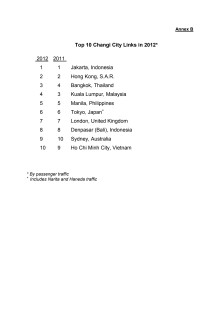 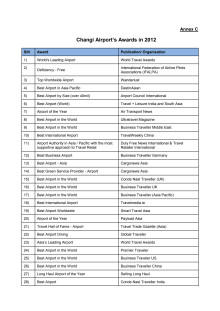