SINGAPORE, 21 June 2017 – Operational readiness trials at Singapore Changi Airport Terminal 4 (T4) – which commenced in October last year – will enter their next phase in the coming months with the participation of airlines scheduled to be operating at the terminal. These trials will involve selected commercial flights by the participating airlines.

Since the commencement of trials nine months ago, Changi Airport Group (CAG) has worked with its airport partners to prepare for operations at T4. The preparations began with table-top exercises, which were designed to refine standard operating procedures, and progressed to ground deployment exercises which focused primarily on staff familiarisation with the new terminal and its processes.

In recent months, volunteers have played the role of passengers to test airport systems and processes. These include the suite of Fast and Seamless Travel (FAST) options, security screening, GST refund, baggage reclaim, ground transport, way-finding, passenger and baggage transfer and vehicular movements in the apron. Altogether, more than 100 trials have been conducted, involving over 2,000 volunteer participants and 1,000 airport staff.

Flight trials were conducted recently with military chartered flights. Soon, trials will be extended to include selected commercial flights. These flights provide valuable opportunities to simulate real flight situations with actual passengers, thereby creating a more realistic operating environment which will enable CAG and its partners to identify gaps which might not have surfaced earlier.

On the checklist of the many items to be tested during the trial flight operations are the FAST options which will be introduced at T4. The FAST initiative offers passengers self-service options at various stages of departure -- check-in, bag drop, immigration and boarding. Please see the Annex for more details.

The FAST trials also test the use of facial recognition technology that Changi Airport will introduce for the first time at T4. Unlike at the existing terminals where passengers’ identity checks are carried out manually by the airlines and security personnel, at T4, facial recognition technology is integrated in the FAST process to authenticate each passenger’s identity. This automated process replaces the need for manual identity verification by staff.

Learnings from rollout of FAST at other terminals

Changi Airport has conducted a phased rollout of FAST at its existing three terminals since 2015. This has provided CAG with insights into challenges posed by integration with airlines’ systems and human-machine interaction. The design of user interfaces was then improved to make it easier for passengers to use.

Two airlines moving to T4, Cathay Pacific and AirAsia, have been providing FAST options to their passengers at Terminal 1, where they currently operate, since February this year. The response has been positive with more than half of the airlines’ passengers choosing the FAST option in the past three months.

The date of commencement of operations at T4 will be determined later, after all the trials show that T4 is ready for operations. Nine airlines will operate at T4 when it opens – the Air Asia Group (of four airlines), Cathay Pacific, Cebu Pacific, Korean Air, Spring Airlines and Vietnam Airlines. Together, they serve an estimated eight million passengers at Changi Airport each year. 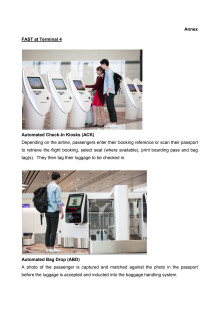 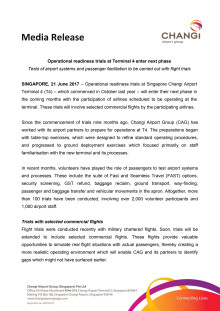