Passenger traffic for September was boosted by growth across all regions, with traffic to and from South Asia rising 13%, the sixth month of consecutive double-digit growth. All of Changi’s top five country markets – Australia, China, Indonesia, Malaysia and Thailand – registered growth of at least 5%. China, Germany, India and the United States were among countries that registered double digit growth. Among Changi’s top 10 routes, Melbourne and Bangkok were the fastest growing, both rising 11%.

For the first three quarters of 2017, passenger traffic rose 5.9% to 46.0 million, supported by growth across all regions. Among Changi’s top 10 country markets for the period, India (+18%) and China (+11%) were the fastest growing. Aircraft movements were 3.4% higher at 277,370 landings and takeoffs, while 1.56 million tonnes of airfreight throughput was shipped through Changi during the nine months, rising 8.1% year-on-year. Among Changi’s top 10 cargo markets, Germany (+27%) was the fastest growing airfreight market, which has seen strong year-on-year growth across all cargo flows.

As at 1 October 2017, more than 100 airlines operate at Changi Airport, connecting. Singapore to some 380 cities in about 90 countries and territories worldwide. With more than 7,000 weekly scheduled flights, an aircraft takes off or lands at Changi roughly once every 90 seconds.

New Services – On 16 September, Air India Express launched new 4x weekly services connecting Singapore to Madurai. This is a new city link for Changi Airport, and is also Madurai’s only international connection to Southeast Asia. With this link, Changi is now connected to 16 cities in India with seven airlines operating more than 240 weekly services.

New Restaurants & Stores – In the public areas, local beverage store LiHo commenced operations of its first airport outlet in Terminal 3’s Arrival Hall. In the Departure Hall of the same terminal, Premium Japanese Farmers Market sells an extensive range of produce such as Wagyu beef cuts, fruits, and bento boxes brought in from Japan. Across from the Farmers Market, Kalms’ automated retail machines offer a range of gifts such as flower bouquets, soft toys and jewellery. In Terminal 1’s transit area, Michael Kors has opened its second Changi Airport store.

Changi Airport is the world's sixth busiest airport for international traffic.It served a record 58.7 million passengers from around the globe in 2016. Changi Airport has 400 retail and service stores, as well as 140 F&B outlets. With over 100 airlines providing connectivity to 380 cities worldwide, Changi Airport handles about 7,000 flights every week, or about one every 90 seconds. 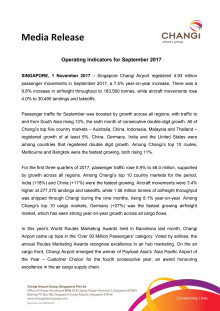 Singapore Changi Airport registered 4.93 million passenger movements in September 2017, a 7.5% year-on-year increase. There was a 9.8% increase in airfreight throughput to 183,560 tonnes, while aircraft movements rose 4.0% to 30,490 landings and takeoffs.