Passenger traffic for the month remained stable compared to a year ago, which saw travel boosted by the Lunar New Year holidays[1] in January 2017. Among Changi’s top 10 country markets, Japan (+11%), India (+9%) and Thailand (+9%) led the gainers. Major city routes that recorded strong traffic growth of at least 8% included Bangkok, Chennai and London.

As at 1 February 2018, more than 100 airlines operate at Changi Airport, connecting Singapore to some 400 cities in about 100 countries and territories worldwide. With more than 7,200 weekly scheduled flights, an aircraft takes off or lands at Changi roughly once every 80 seconds.

Other highlights at Changi[2]

Changi Airport is the world's sixth busiest airport for international traffic.It served a record 62.2 million passengers from around the globe in 2017. Changi Airport has 400 retail and service stores, as well as 140 F&B outlets. With over 100 airlines providing connectivity to 400 cities worldwide, Changi Airport handles about 7,200 flights every week, or about one every 80 seconds.

A record 62.2 million passengers for Changi Airport in 2017 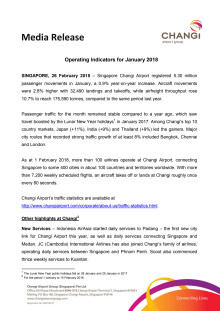