Singapore, 30 October 2017 – Beautifully embroidered Sarong Kebaya, an antique wooden wedding bed, and Peranakan porcelain ‘nyonyaware’ are some of the historical exhibits and artefacts on display at a new Peranakan Gallery in Changi Airport’s new Terminal 4 (T4).

The gallery, a first-ever collaboration between Changi Airport Group and National Heritage Board, is unveiled by the Peranakan Museum to enhance the heritage experience as passengers get to discover and learn about the rich Peranakan culture.

Located in the Departure Transit area, the Peranakan Gallery is part of T4’s Heritage Zone. Visitors to the Peranakan Gallery will be greeted by a doll house model display of Peranakan shophouse architecture. Historical portraits of pioneers many decades ago lined the walls of the 150sqm gallery. The gallery’s displays, which will be refreshed periodically, are an introduction to the material culture of the Peranakan, and its influence on contemporary local design.

The Peranakan Gallery is organised into four sections:

-Identity and Diaspora explores the origin and spread of Peranakan or ‘local born’ communities in the Southeast Asia region through photographs. These include the Chinese Peranakans (or Baba-Nyonya), Jawi Peranakans (descendants of Indian Muslims), Chitty Melaka (descendants of Hindu traders) and Eurasians (European Peranakans);

-Architecture and Household provides a semi-contextual recreation of the interior of a Peranakan home and its furnishings, illustrating the hybrid nature of Peranakan aesthetics through a shophouse model and objects that embrace both traditional Chinese and non-Chinese elements;

-Fashion and Textiles showcases an iconic aspect of Peranakan fashion and style, the beautifully embroidered sarong kebaya, an adaptation of which is still worn by Singapore Airlines flight attendants to this day;

-The Modern Peranakan looks at the impact of the Peranakans on contemporary Singapore art, design and the performing arts. This section includes modern and historical examples of nyonyaware (porcelain made in China for the Peranakan market), contemporary photography, as well as exclusive footage of performances of Emily of Emerald Hill by Stella Kon, a landmark play credited as one of the first to feature a distinctly Singaporean voice and identity.

Complementing the galleries of the Peranakan Museum (at Armenian Street), which explores the culture of Peranakan communities in Southeast Asia, the Peranakan Gallery at T4 examines how Peranakan culture has inspired contemporary living and design. The gallery also showcases how the Peranakans of Southeast Asia, known for their hybrid style, customs, cuisine, language and prolific use of colours, have added vibrancy to Singapore’s societal fabric.

Mr John Teo, General Manager of the Peranakan Museum, explains: “The Peranakan Gallery shows the continued influence of Peranakan material culture, which has evolved over more than 200 years, on culture and contemporary living in Singapore today. The inherent hybridity of Peranakan culture, a result of generations of immigrants living side-by-side with indigenous communities in port cities across Southeast Asia, also invites us to consider Singapore’s own heritage and multicultural society.”

Ms Chang Hwee Nee, Chief Executive Officer of the National Heritage Board, notes, “The Peranakan Gallery is an excellent example of the close collaboration between the Peranakan Museum and the Changi Airport Group. I would like to thank CAG for their confidence in the museum, and their significant in-kind donation for this gallery. The Peranakan Gallery is a unique platform to share and promote Singapore’s Peranakan culture and heritage with the world.”

Mr Yam Kum Weng, CAG’s Executive Vice President Airport Development said, “The Peranakan Gallery with its display of artifacts adds a dimension of depth and authenticity to the Heritage Zone in T4. Beyond the Peranakan Love Story show and alluring offerings of local gastronomic delights in the Heritage Zone, intrigued passengers will have the opportunity to learn more about the heritage and culture of the Singapore Peranakan community at the Peranakan Gallery. We are excited about our collaboration with National Heritage Board to promote a part of our Singaporean culture and heritage to both our local and foreign passengers.”

The Peranakan Gallery will be open 24 hours daily, and is free for all passengers who have cleared departure immigration.

More information on T4 is available at T4.changiairport.com

Annex A: About the Peranakan Gallery

About the Peranakan Museum

The Peranakan Museum explores the culture of Peranakan communities in Southeast Asia. Installed in the former Tao Nan Chinese School, built in 1912, this intimate museum possesses one of the finest and most comprehensive collections of Peranakan objects. Galleries on three floors illustrate the cultural traditions and the distinctive visual arts of the Peranakan.

The Peranakan Museum provides a stimulating and educational experience for all, while representing the living culture of the Peranakan community in the region. The museum is a component of the Asian Civilisations Museum, operating under the National Heritage Board. For more information, visit http://peranakanmuseum.org.sg 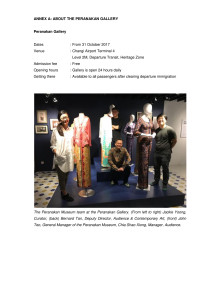