SpiceJet launched its cargo operations under SpiceXpress in September 2018 and has since expanded its fleet to 19 cargo aircraft, including five widebody aircraft[1]. Since the start of the Covid-19 pandemic, SpiceJet has aided in the transportation of critical goods and medical supplies internationally. The airline has emerged as India’s largest air cargo operator by fleet and cargo carriage[2].

Maintaining connectivity between Singapore and India amid the pandemic

The Covid-19 pandemic has resulted in a reduction in global air travel. To address the reduction in bellyhold cargo capacity due to the fall in passenger traffic at Changi Airport, Changi Airport Group (CAG) has been working closely with its airline partners who operate the Singapore-India route to ensure that supply chains are kept open. In 2020, India was Changi Airport’s sixth largest air cargo market, with cargo tonnage reaching 75,000 tonnes for the year.

Between April and December 2020, SpiceJet operated over 230 chartered cargo flights, comprising freighter and cargo-only passenger flights, between India and Singapore. The air cargo capacity injected by SpiceJet has helped support air trade and the conveyance of humanitarian goods, including medical supplies and perishables, between the two countries.

In addition to SpiceJet, there are four other cargo airlines[3] operating freighter flights between Singapore and India. In 2020, airlines such as Emirates, IndiGo, Singapore Airlines and SriLankan Airlines have also operated cargo-only passenger flights between India and Singapore.

Mr Lim Ching Kiat, CAG’s Managing Director of Air Hub Development said, “CAG has been engaging SpiceJet for several years to mount scheduled services to Singapore, hence we are pleased to welcome SpiceJet to Changi’s family of airlines. In these challenging times when air cargo capacity is constrained, the introduction of SpiceJet’s freighter service is much welcomed. The additional capacity helps support the transportation of essential goods such as medical and food supplies between the two countries.”

Mr Sanjiv Gupta, SpiceXpress’s CEO said, “We are much delighted to commence our scheduled freighter operations to Singapore. This development would strengthen air trades between the two countries by providing faster and seamless logistics solutions. In addition, this strategic move would help SpiceXpress build its network in South East Asia. Singapore is also well-positioned as a springboard for SpiceXpress into other markets such as Europe and Australia.” 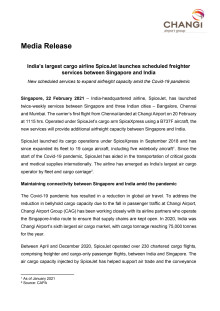