SINGAPORE, 20 September 2013 – Changi Airport Group (CAG) announced today that four airlines will move their operations to new terminals at Changi Airport to optimise capacity utilisation across its three terminals.  This move will enable the airport to better prepare for further passenger traffic growth.

Details of the airline relocation are as follows:

Please refer to the Annex for an updated list of airlines at each terminal.

The relocation exercise has taken into account the growth plans of Changi Airport’s airline partners to ensure that its infrastructure will continue to adequately support the airlines’ expansion.  It also involves a reassignment of check-in rows within terminals for a number of other airlines at Changi Airport.

To assist passengers through the initial transition, CAG will provide way-finding signage around the terminals, with additional manpower deployed to ensure that passengers are directed to the correct terminal and check-in row for their flights.  Information will also be posted on various digital platforms to update passengers about the move.

Changi Airport handles more than 52 million passenger movements a year and is the sixth busiest airport in the world for international passenger movements.  While Terminal 4 and the expansion of Terminal 1 (as part of Project Jewel) will raise terminal capacity to 85 million passengers per annum by 2018, CAG will also undertake periodic reassignment of terminal facilities to spread out passenger and flight movements especially during the peak periods.  This will allow for more optimal utilisation of resources such as check-in counters, gate holdrooms and aircraft parking stands, while providing for better passenger flow and more spatial comfort at major gathering points.

Steady growth of passenger traffic is expected to continue at Changi Airport.  The recent expansion of the Air Services Agreement inked between Singapore and Indonesia will bring about an estimated increase of more than 30% in seat capacity between both countries for the Northern Winter 2013 season[1].  In addition, airlines, such as Singapore Airlines, SilkAir, Air Asia and Lion Air, have put in orders for new aircraft.

Mr Yeo Kia Thye, CAG’s Senior Vice President for Airport Operations, said, “We review Changi Airport’s terminal utilisation regularly as it is important to ensure that our  infrastructure is best used to support the development plans of airlines and to ensure smooth airport operations for our passengers.

“We are deeply appreciative of the cooperation that our airline partners have accorded to us for this relocation exercise.  CAG will work closely with each of them to ensure a seamless transition and minimal inconvenience to passengers.”

For the latest flight information, passengers should check www.changiairport.com, the iChangi mobile app, or contact the Changi Contact Centre on +65 6595 6868.

Changi Airport (www.changiairport.com) is the world’s most awarded airport with more than 440 accolades received since it opened in 1981. To serve passengers and visitors from the world over, there are over 350 retail stores and 120 F&B outlets across the airport's three terminals.  Changi handled more than 51 million passenger movements in 2012, an annual record.  Today, it serves some 110 airlines flying to over 250 cities in about 60 countries and territories worldwide.  A flight takes off or lands at Changi roughly once every 100 seconds. 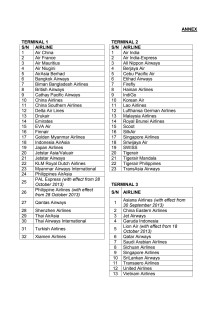 Changi Airport Group (CAG) announced today that four airlines will move their operations to new terminals at Changi Airport to optimise capacity utilisation across its three terminals. This move will enable the airport to better prepare for further passenger traffic growth.