SINGAPORE, 24 September 2014 – Singapore Changi Airport today celebrated the arrival of MIAT Mongolian Airlines, directly connecting Singapore to Mongolia for the first time.  The Mongolian national carrier will operate a twice-weekly service between Ulaanbaatar and Singapore, via Beijing.  The route will utilise a 174-seat Boeing 737-800 aircraft in a two-class configuration[1].

To commemorate the new link, a delegation led by Mr Gansukh Amarjargal, Mongolia Member of Parliament and Minister of Road and Transportation, together with Mr Gungaa Jargalsaikhan, President and CEO of MIAT Mongolian Airlines, was on board the inaugural flight that arrived at Changi Airport at 1700 hours.  They were welcomed by Her Excellency Banzragch Delgermaa, Ambassador of Mongolia to Singapore, and Mr Yam Kum Weng, Changi Airport Group’s (CAG) Executive Vice President for Air Hub & Development.

MIAT Mongolian Airlines is the fourth new carrier for Changi Airport this year, following Uzbekistan Airways and Spring Airways that launched flights in April and VietJet in May, while Ulaanbaatar becomes the third new city link this year, following Tashkent and Lanzhou.

The new Ulaanbaatar-Singapore service opens up new business and tourism opportunities between Singapore and Mongolia.  Singapore is a well-regarded leisure and business destination for Mongolians.  In the 12-month period ending July 2014, Singapore welcomed more than 8,000 visitors from Mongolia[2].

With over 50 city links and close to 2,000 weekly services to Southeast Asia and Southwest Pacific, Singapore is well-positioned to be Mongolia’s conduit to the region, through MIAT Mongolian Airlines’ partnership with other carriers operating at Changi Airport.  From the capital city of Ulaanbaatar, MIAT Mongolian Airlines provides travellers direct access to Germany and Russia.

Over the past decade, Mongolia has seen rapid industrial and economic transformation.  Since 2011, the country’s GDP growth has been outperforming those of developing East Asian and Pacific markets.  In 2013, Mongolia recorded a strong GDP growth of 11.7%[3].

Singapore and Mongolia enjoy close bilateral ties.  Over the years, there have been regular engagements through official visits and meetings between the two countries.  More recently, the President of Mongolia, Tsakhia Elebegdorj, conducted a state visit to Singapore and graced the inaugural Mongolia-Singapore Business Forum in November 2013.  Bilateral trade between Singapore and Mongolia amounted to more than S$85 million in 2012 and the new Mongolia-Singapore air bridge will deepen existing bilateral economic ties and enhance people flow between the two countries[4].

Changi Airport Group’s Executive Vice President for Air Hub & Development, Mr Yam Kum Weng, said, “We are proud to welcome Mongolia’s national carrier to the family of airlines at Changi Airport.  Mongolia has enjoyed strong economic growth and as the country opens up its economy and resource sectors, there will be more business and investment opportunities not only between our two countries, but also between Mongolia and Asia-Pacific.  The direct Ulaanbaatar-Singapore service by MIAT Mongolian Airlines is thus timely to support growing demand for business and leisure travel.”

The Land of Genghis Khan

Holiday-makers in Singapore will now be able to add another exotic destination to their “to-travel” list.  Travellers will be drawn by Mongolia’s vast scenery and unspoilt wilderness, accented by snow-capped mountains and complemented by the renowned hospitable, nomadic culture of its people.  Mongolia is also home to three UNESCO heritage sites and history-enthusiasts can relive the story of the legendary Genghis Khan, experiencing how the Mongols built the biggest medieval empire in the world.

MIAT Mongolian Airlines will operate at Changi Airport’s Terminal 3 with the following schedule:

To celebrate its commencement of operations at Changi Airport, MIAT Mongolian Airlines is offering promotional fares on return economy class tickets starting from S$670[5].  More details are available at www.changiairport.com/miat.

Changi Airport is the world's sixth busiest airport for international traffic.  It served a record 53.7 million passengers from around the globe in 2013.  More than 350 retail stores and 120 F&B outlets are situated across three terminals to cater to passengers and visitors.  With over 100 airlines providing connectivity to 300 cities worldwide, Changi Airport handles about 6,600 flights every week, or about one every 90 seconds.

Airlines to GAIN from long-haul and transfer traffic boost

Rebates and incentives totalling up to S$50 million for airlines; Extension of Changi Transit Programme for passengers

Singapore Changi Airport handled some 4.58 million passenger movements in July 2014, an increase of 1.0% compared to the same period last year, while flight movements dipped 2.6% to 28,200. During the month, cargo tonnage at Changi registered 155,000 tonnes, representing a decline of 2.4% from a year ago. 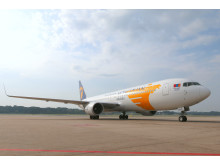 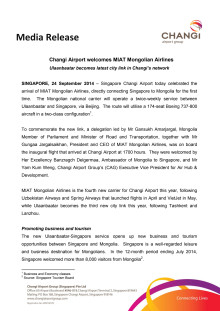