Changi Airport Group (CAG) announced today a package of support measures for its cargo partners, which will provide the sector with cost relief against the backdrop of a challenging outlook for the global airfreight industry. These measures, which include a one-time Special Assistance Package (SAP) for cargo agents and the extension of a landing fee rebate for scheduled freighter flights will apply for a year starting from 1 April 2016 (2016/17).

Currently, cargo agents leasing cargo facilities from CAG at the Changi Airfreight Centre enjoy an incentive scheme which rewards them based on the volume of cargo handled. This scheme will be extended to 2016/17 to provide Changi’s cargo partners with continued cost assistance while encouraging growth. In addition, in view of the uncertain industry outlook, CAG will be enhancing the scheme in 2016/17 with a one-time SAP to provide increased cost support to cargo partners. With this enhancement, cargo agents that achieve strong growth will potentially be able to enjoy cost relief equivalent to a rebate of up to 45% on their annual rental.

On top of this, CAG will be extending the existing 30% landing fee rebate for scheduled freighter operations for another year to 31 March 2017. In total, these measures for 2016/17 would amount to about S$14 million.

Air cargo demand has been subdued by a tough global economic environment, feeble world trade and a slowdown in China’s economy. Consequently, global airfreight volumes experienced a modest growth of 2.2% in 2015, a slower rate compared to 2014, with all major regions recording weakness in airfreight traffic.

Mr Lim Ching Kiat, Senior Vice President, Market Development, Changi Airport Group, said: “The soft industry outlook is likely to continue in 2016, due to continued headwinds brought about by weaker economic conditions and slowing global trade. In light of the trying business conditions, we are committed to support our cargo partners through these difficult times. Amid the challenges, we hope that CAG’s package of support measures for our cargo partners will serve as a source of optimism.”

Changi Airport is among the world’s top 10 airports for international airfreight movements. In 2015, it handled 1.85 million tonnes of cargo, a 0.5% growth year-on-year, with the growth of transhipment volumes outweighing lower import and export volumes. During the year, the addition of three freighter airlines - My Indo Airlines, Polar Air Cargo and AirBridgeCargo - enhanced Changi’s cargo network. Pharmaceuticals was one of the best performing cargo segments at Changi Airport last year, growing 45% year-on-year, albeit from a small base.

Changi Airport is the world's sixth busiest airport for international traffic.  It served a record 55.4 million passengers from around the globe in 2015.  More than 350 retail stores and 160 F&B outlets are situated across three terminals to cater to passengers and visitors.  With over 100 airlines providing connectivity to 320 cities worldwide, Changi Airport handles about 6,800 flights every week, or about one every 90 seconds. 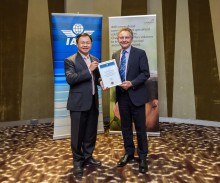 Changi Airport Group (CAG) announced today that it will be the first airport in Asia to launch a community of cargo partners whom it will support to pursue the attainment of the International Air Transport Association’s (IATA) Center of Excellence for Independent Validators on Pharmaceutical Handling (CEIV Pharma) certification – strengthening Changi’s capabilities to handle pharmaceutical cargo.