SINGAPORE, 28 April 2016 – Changi Airport Group (CAG) celebrated a year of close partnerships and joint successes with its top airline partners today, at the 2016 Changi Airline Awards. At the annual event, which is into its 11th year, 25 awards were presented across six categories to airlines that have contributed most significantly to the growth of the Singapore air hub in 2015.

The overall Partner of the Year award was presented to Xiamen Airlines, for its substantial contribution to the development of Changi Airport. Among Chinese carriers operating at Changi, Xiamen Airlines is the third largest in terms of passenger carriage and the one with the widest Singapore-China network, through its connectivity to seven Chinese cities.[1]

In 2015, the airline deepened its collaboration with CAG through the inking of a three-year Memorandum of Collaboration (MoC) to jointly grow traffic and connectivity between Singapore and China, as well as to pursue commercial collaborations. On the back of this MoC, Xiamen Airlines added its fourth daily service (Xi’an-Hangzhou-Singapore) in March 2015, doubling the capacity on the Singapore-Hangzhou route. The carrier also partnered CAG in a series of market development initiatives, such as travel trade seminars in Xi’an, Zhengzhou and Johor Bahru to help to grow travel demand.

In 2015, Xiamen Airlines carried more than 370,000 passengers to and from Changi, an outstanding 30% increase year-on-year. Over the years, it has been CAG’s steadfast partner in growing the China market, registering a compounded annual growth rate of 11% in passenger traffic since 2011. Please refer to Annex B for more information on the Partner of the Year award.

Xiamen Airlines’ Chairman and CEO, Mr Che Shanglun, said, “Singapore has always been a strategic point in Xiamen Airlines’ Southeast Asian network. Changi Airport, being one of the world’s best airports, is also one of Xiamen Airlines’ closest partners. We look forward to continuing our strong collaboration with CAG to further the aviation development between Singapore and China, and to continue to provide high quality services to our passengers across the world.”

2015 was a year of resilience and recovery for Changi Airport, which saw a turnaround in passenger traffic in the second half of the year, following a weaker showing of flat growth in the first half. Led by the recovery in intra-Asian travel, Changi welcomed eight new scheduled airlines and 10 new city links – capping the year with a commendable passenger traffic growth of 2.5% to 55.4 million passengers, an all-time high.

CAG’s CEO, Mr Lee Seow Hiang, said, “The growth momentum has extended into 2016. We achieved growth of 10% in the first quarter of this year, on the back of strong travel

demand across all our major markets. Among Changi’s top five country markets, traffic to and from China, Malaysia and Thailand all enjoyed double-digit growth.

“In the coming months, we look forward to the launch of Singapore Airlines’ new services to Dusseldorf, Canberra and Wellington. We are also excited to welcome in June, United Airlines’ non-stop service between Singapore and San Francisco. An improvement in global economic activity, stable oil prices and the delivery of longer range aircraft will present new growth opportunities for the industry.”

Annex B - Citation for Partner of the Year Award

Changi Airport is the world's sixth busiest airport for international traffic.  It served a record 55.4 million passengers from around the globe in 2015.  More than 360 retail stores and 140 F&B outlets are situated across three terminals to cater to passengers and visitors.  With over 100 airlines providing connectivity to 320 cities worldwide, Changi Airport handles about 6,800 flights every week, or about one every 90 seconds. 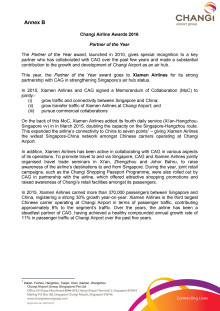 Citation for Partner of the Year Award 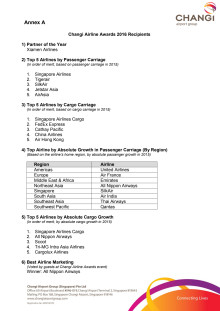