SINGAPORE, 30 April 2018 – Changi Airport Group (CAG) celebrated another year of strong partnership with its airline partners earlier this evening at the Changi Airline Awards 2018 held at The Ritz-Carlton, Millenia Singapore. Mr Ng Chee Meng, Minister for Education (Schools) & Second Minister for Transport, was the Guest of Honour at the annual awards event which honours airlines for their contribution to the Singapore air hub.

A total of 25 awards were presented to the airlines who contributed most significantly to Changi’s air traffic in 2017. They comprise the following categories – Top Airlines & Airline Groups by Passenger Carriage and Cargo Carriage, Top Airlines by Absolute Passenger Growth and Absolute Cargo Growth, Best Airline Marketing, and Partner of the Year. A list of all the award winners can be found in Annex A.

The Partner of the Year award was presented to Singapore Airlines, in recognition of its efforts in recent years to enhance Singapore’s global air hub status and network connectivity. This included the airline’s recent delivery of the Boeing 787-10 with its new regional cabin products, as well as the new A380 aircraft fitted with state-of-the-art cabin products. Singapore Airlines has also expanded its route network to include links to Canberra, Dusseldorf, Stockholm and Wellington. It also launched daily non-stop services to San Francisco.

Goh Choon Phong, Chief Executive Officer of Singapore Airlines Limited said, “Singapore Airlines is honoured to be recognised as Partner of the Year at the Changi Airline Awards 2018. The SIA Group is committed to growing Singapore’s network connectivity for the benefit of our customers and we look forward to working with CAG in support of the further enhancement of Singapore’s position as a leading aviation hub.”

Investing in the future with Changi’s partners

Mr Lee Seow Hiang, Chief Executive Officer of CAG said at the awards ceremony that it is vital for Changi Airport to have sufficient capacity to support airline’ growth plans. This includes infrastructure investments in new development projects, as well as finding ways to unlock capacity by enhancing existing infrastructure for higher operational efficiency.

Ahead of the completion of Changi East, CAG will be working with airline and airport partners to optimise use of existing resources and capacity at Changi Airport. These include the Airport-Collaborative Decision Making (A-CDM) initiative and the revamp of Terminal 2.

Mr Lee said, “Changi A-CDM is a fascinating combination of hardware integration, data analytics and innovative technology. It has delivered promising results since its launch about two years ago. We have effectively reduced the average runway queuing time for departing flights by 90 seconds in the first year, and a further 30 seconds in the second year, translating to fuel savings for the airlines.”

He added, “Apart from achieving greater efficiency through optimising processes, we will also be adding capacity through the revamp of Terminal 2, which will increase its handling capacity by about 3 million passengers per annum. Besides harnessing new innovations and learnings from T4, the revamp will also entail an upgraded baggage handling system and improvements to the Skytrain service. Upgrading works will take about four to five years, and as with the case for past upgrading exercises, we will place a strong focus on minimising impact to T2 operations and passenger experience.

2017 was a positive year for Changi Airport, with a record-breaking 62.2 million passengers passing through its gates – a robust 6.0% year-on-year growth, and with air cargo throughput surpassing the 2 million tonne mark for the first time in a calendar year.

Annex B – Citation for Partner of the Year Award 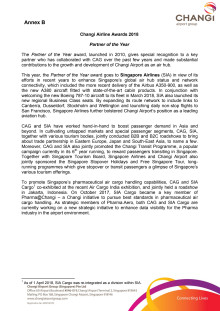 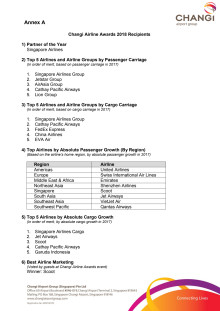