A total of 25 awards were presented to airlines who made the most significant contribution to Changi Airport in 2018. They comprise the following categories – Top Airlines & Airline Groups by Passenger Carriage and Cargo Carriage, Top Airlines by Absolute Passenger Growth and Absolute Cargo Growth, Best Airline Marketing, and Partner of the Year. A list of all the award winners can be found in Annex A.

The Partner of the Year award was presented to Air China in recognition of itscontinuous efforts to enhance Changi’s connectivity to China. Other than expanding its Singapore network, Air China also worked closely with CAG to grow its subsidiary airlines’ presence in Singapore.

Over the past six months, Air China added a third daily Beijing service, while its subsidiaries – Shandong Airlines and Shenzhen Airlines, launched services to Jinan and Nanchang respectively. During this period, the Air China Group collectively increased its services to six Chinese cities[1] by 50% to 52x weekly, with more than 12,000 weekly one-way seats. To complement its capacity injection, Air China partnered CAG on various marketing initiatives in China and Singapore to stimulate two-way passenger demand.

Mr Song Zhiyong, President of China National Aviation Holding Corporation Limited and Air China Limited said, “Changi Airport Group is Air China’s long-term strategic partner. We hope to continue working with CAG in expanding our connectivity, as well as in marketing and brand promotions, to encourage outbound passengers to fly Air China and to choose Singapore as a travel destination. At the same time, we hope that we can grow air travel demand for inbound travellers on Air China. Looking ahead, we hope to continue working closely with CAG to explore and venture into new potential markets. This will allow us to strengthen the economic cooperation between China and Singapore, while contributing to the people and cultural exchanges between the two countries.”

Mr Lee Seow Hiang, CEO of CAG said at the awards ceremony that Changi Airport continues to invest in infrastructure, to increase capacity for the long and medium term. “We are progressing well with the Changi East development, as concept design is on track and coming to a close. Once completed, we will move on to the schematic design of the Changi East development which will take us another few years. In the shorter term, we will continue to work hard to sustain the traffic growth that our airline partners have planned for. T2 will also be expanded, and refreshed over the next five years.”

Mr Lee added that other than increasing capacity, Changi Airport has also strived to create new offerings for its passengers, with the newly-opened Jewel Changi Airport. This includes early check-in facilities and the Changi Lounge, which caters to the intermodal transfer experience for fly-cruise and fly-ferry passengers. “We are happy to share that we have found good traction with several cruise liners, as well as hospitality partners, and look forward to hosting our first intermodal transfer passengers soon.”

Changi Airport is the world's seventh busiest airport for international traffic, managing a record 65.6 million passenger movements in 2018. Changi Airport has 400 retail and service stores, as well as 140 F&B outlets. With over 100 airlines providing connectivity to 400 cities worldwide, Changi Airport handles about 7,400 flights every week, or about one every 80 seconds. 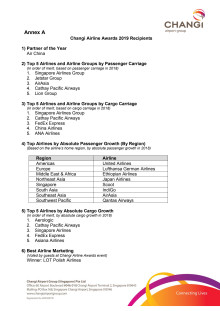 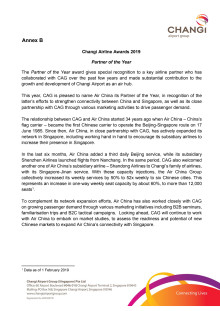