SINGAPORE, 13 March 2020 – Singapore Changi Airport handled 3.45 million passenger movements in February 2020, a decrease of 32.8% compared to the same period last year. Aircraft movements declined by 12.3% to 26,200 landings and takeoffs, while airfreight throughput rose 7.6% to 147,000 tonnes for the month. The spike in airfreight throughput in February was largely due to urgent fulfillment of backlogs after a prolonged factory shutdown in China and the extra leap-year day.

Air travel demand continued to be impacted by the Coronavirus disease 2019 (Covid-19) situation. For the month of February, all regions except Africa recorded declines. Travel to South East Asia and North East Asia was impacted the most, with 1.5 million fewer passenger movements compared to the same period last year. Traffic to major travel markets declined across the board including China (-92%), Hong Kong (-75%), South Korea (-46%), Taiwan (-38%) and Thailand (-33%).

For the first two months of 2020, passenger traffic at Changi Airport fell 12.9% to 9.40 million while aircraft movements totalled 59,700, a decrease of 4.7% compared to the same period last year. As of 9 March, due to various flight cancellations, the available seat capacity at Changi Airport for the month of March 2020 has declined by close to 30%, compared to what was originally scheduled.

To support its tenants, CAG will continue to run various promotions. This March school holidays, the Trolls World Tour will take over Changi Airport (T3 Departure Hall Level 2). Featuring the iconic Poppy’s Hot Air Balloon and Sheila B, the activation includes a Boombox-inspired retail outpost selling Trolls merchandise (T3 Basement 2). Fans can also strike a pose with Poppy and friends with the 2D Trolls Characters Cut-Outs at ST3PS from 17 March 2020. Additionally, a limited-edition Trolls World Tour tote bag can be redeemed for free with a S$50 spend in a single receipt from Changi Airport’s public areas.

Travellers who spend S$60 and above at participating retail outlets in the departure transit area or on iShopChangi will get to enjoy S$10 off their next purchase. Terms and conditions apply.

Singapore Changi Airport handled 1.65 million passenger movements in March 2020, a decrease of 70.7% compared to the same period last year. Aircraft movements declined by 49.9% to 16,200 landings and takeoffs, while airfreight throughput dropped 19.1% to 149,000 tonnes for the month.

Update on indicators for first half of February 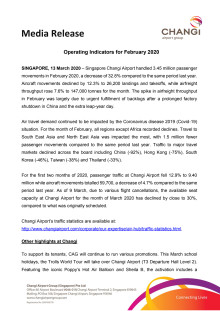